Groundwater conservation districts are working together to manage shared aquifers through Groundwater Management Areas (GMAs). Most of the Hill Country falls in GMA 9. GMA-9 member Groundwater Conservation Districts (GCDs) gather as a GMA to plan for the future of the Trinity Aquifer. GMA-7 in the western Hill Country plans primarily for the Edwards Plateau Aquifer. GMA-10 in the south and eastern Hill Country plans primarily for the future of the Edwards Balcones Fault Zone Aquifer. Many of our GCDs are bounded by county lines and aquifers do not share these boundaries. Additionally, our major aquifers may have some overlap, and there are several minor aquifers that GMAs that are relevant for regional planning. For these reasons, some GCDs are in more than one GMA, and may participate in several distinct regional planning processes.

It is important to note that the health and productivity of your local spring systems and water well may be directly tied to the DFC set for your aquifer. The groundwater management system was designed by the state legislature to be a locally controlled, bottoms up planning process. A local constituency elects several of its neighbors to serve as local GCD Directors — to protect the health and historical productivity of their valuable shared resource. Your locally elected GCD Directors meet once a month and want to hear your opinions about how you would like your water well and springs to look when your grandchildren inherit them.

The planning process works like this. Your local GCD, with public input, makes a decision every five years about what it wants its aquifer levels to look like in 50 years — and manages to that goal. All of the GCDs in each GMA submit their future goals (DFCs) in order to negotiate an aquifer wide average future condition and to commit to the maintenance of that goal through management.

As HCA advisor David K. Langford tells us often, “The future belongs to those who show up.”

The Hill Country’s GMAs have held several public meetings in 2015 to discuss the draft DFC. In recent weeks, groundwater specialists and citizens have been submitting comments to help guide our Hill Country GMAs Desired Future Condition process. Decisions being made now will affect the future of our drinking water supply, spring flow, the health of our creeks, rivers and streams and the life and economy of the Hill County for future generations. We will continue to gather, monitor, and publish public comment.

The 2016 DFC process is rapidly coming to a close, and without substantial input, the collective districts of GMA-9 will maintain the 30′ aquifer draw-down for the next five years. The deadline for GMAs to deliver DFC Desired Future Conditions goals to the Texas Water Development board is May 1st, 2016. The last day to submit your public comments  on GMA-9’s expected DFC of a 30-foot draw-down by 2070 is December 31st, 2015. Please use this format, and submit your comments to:

The TWDB rules specify that the board presidents of the GCDs comprising the GMA are those who have a vote in the DFC designation vote. In GMA-9’s process, each member GCD Board instructs a representative on how to vote. A two thirds vote is required to approve a DFC.

The next public meeting of GMA-10 (Eastern Edwards Aquifer) will be held on March 14th in San Antonio at the Edwards Aquifer Authority headquarters. The agenda will include discussion and proposal of DFCs for 2016.

The 2016 DFC process is rapidly coming to a close, and without substantial input, the collective districts of GMA-10 will maintain the 25′ Trinity Aquifer draw-down for the next five years. The deadline for GMAs to deliver DFC Desired Future Conditions goals to the Texas Water Development board is May 1st, 2016. The last day to submit your public comments  on GMA-10’s expected DFC of a 25-foot Trinity Aquifer draw-down by 2070 is July 15th, 2016. Submit your comments to:

The TWDB rules specify that the board presidents of the GCDs comprising the GMA are those who have a vote in the DFC designation vote. In GMA-10’s process, each member GCD Board instructs a representative on how to vote. A two thirds vote is required to approve a DFC.

The next meeting of GMA-7 (Western Edwards Aquifer) will be held March 17th at 10:00 am in San Angelo. The agenda will include discussion of proposed 2016 DFCs.

The 2016 DFC process is rapidly coming to a close, and the collective districts of GMA-7 have not established an Edwards-Trinity Aquifer draw-down for the next five years. The deadline for GMAs to deliver DFC Desired Future Conditions goals to the Texas Water Development board is May 1st, 2016. The last day to submit your public comments on GMA-7’s modest 5-foot DFC is July 15th. Submit your comments to:

The TWDB rules specify that the board presidents of the GCDs comprising the GMA are those who have a vote in the DFC designation vote. In GMA-7’s process, each member GCD Board instructs a representative on how to vote. A two thirds vote is required to approve a DFC. 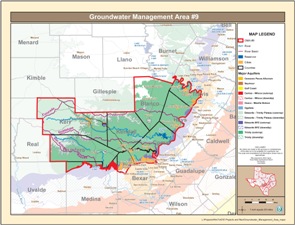 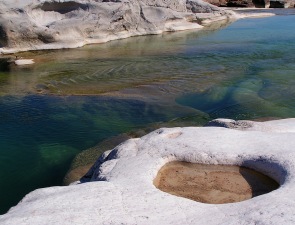 Notes and information on the 2010 DFC process:

“GMA-9 plays a critical role in determining the future of the Texas Hill Country. “DESIRED FUTURE CONDITIONS” is a phrase that participates in a kind of vision we have for this region, this place where we live and which we care for. The presence of clear flowing water in our streams is critical to both land values and our quality of life.” Jack Hollon, former Hays-Trinity GCD Board Member, current president of the Wimberley Valley Watershed Association.

The full text of Jack Hollon’s comments which call for no additional drawdown of the aquifer here.

“In its October report to Governor Perry, the Drought Preparedness Council provided the widespread impact of low groundwater levels in the Edwards-Trinity Aquifer system and its river basins. “Medina and Canyon Lakes reported new record low levels and Lake Travis remained at its third lowest level on record. Victoria saw enough improvement in reservoir levels to drop Stage 2 watering restrictions. However, the Edwards Aquifer remained low, causing San Antonio to remain in Stage 2 restrictions, while Kerrville continued Stage 3 restrictions.” As it is the springs of the Edwards Group of the Edwards-Trinity Plateau Aquifer that feed the headwaters of the Medina and Guadalupe Rivers, this serves well to illustrate their relevance in Edwards-Trinity Aquifer system. “ Milan J. Michalec Director, Precinct 2, Cow Creek Groundwater Conservation District

How much your well level goes down due to increased pumping varies considerably depending on where you live. Thus it is very misleading to talk about “average” aquifer drawdown. The “average” comes from summing up areas which will see little drawdown with areas that will see drawdown several times the “average.” Count on this. Everybody’s well level will go down, at least some, with increased pumping. It’s only a question of how much. If you had well problems during last year’s drought, then your problems will only be worse when the next drought comes around.

The story on springs is similar. Whether your spring will see reduced flow or even dry up due to increased pumping depends very much on where you live. Count on this. The spring that ran when you were a child and has now dried up is not coming back.” Lee Kneupper, Bandera, Texas

“I challenge your assertion that DFC’s can only apply to an aquifer. In Hays County the karstic geology, climatology, and topography connect surface and groundwater uniquely and inseparably so that a failing aquifer is readily apparent in diminished spring and stream flows. The public can IMMEDIATELY SEE THE FAILURE OF OVERPUMPED AQUIFERS as springs and streams dry up while falling water well levels remain hidden underground and out of sight and mind until it is too late.” David Glenn, P.G. 5525, Wimberley, Texas “WATER is the elixir that makes the Hill Country magic”

“This process is supposed to be about agreeing on a “Desired Future Condition” (DFC) for the aquifer. To a great extent the process has devolved into one of adopting the perceived “Inevitable Future Condition” (IFC) based merely on population growth projections, expected demand and estimates of a regional water budget model. This was not the intent of the law but working through and publicizing the IFC may be all that is politically achievable at this time. The intent of the process was for the stakeholders to make a conscious decision about the future conditions of the aquifer not to merely make a decision just to accommodate growth projections to avoid making tough decisions.” Andrew Backus, former director HTGCD

“There is special concern about the potential impact of the DFC selected at your meeting on Jacobs Well and Cypress Creek causing irreparable economic and environmental damage to the Wimberley Valley, Hays County Texas”.

A summary of oral public comments.

A summary of written public comments.

"All my life I have drawn sustenance from the rivers and from the hills of my native state... I want no less for all the children of America than what I was privileged to have as a boy."   -Lyndon B. Johnson
Donate
Copyright 2015 - All Rights Reserved