Local and legislative efforts to create a system to protect Trinity Aquifer water wells and springs in Western Travis County is a success. Thanks to the hard work of area political leaders at the county and legislative levels, a new groundwater conservation district (GCD) in western Travis County will complete the state of Texas’s requirement of GCDs across the Hill Country’s Trinity Aquifer. Local voting on November 5th, 2019 resulted in a 75% margin of victory at the polls and new Directors were elected.

The District will benefit local well owners by:

The Trinity aquifer is the sole source of water for many households in western Travis County and the Hill Country. Booming population growth has strained the aquifer’s ability to produce good quality water in sufficient volume to keep up with demand. A result has been dried up water wells and diminished spring-flows that feed our creeks, rivers, and lakes.

Former State Representative Paul Workman, Representative Vikki Goodwin, Senator Dawn Buckingham, County Commissioner Gerald Daugherty and Travis County Judge Sarah Eckhardt, cooperated across party lines to reduce the pressure on the aquifer by creating a non-taxed based district that will protect the groundwater resources in the GCD in accordance with State law and locally established objectives.

While the GCD is crafted to protect the aquifer’s majority of users, its enabling legislation was written to protect most private domestic and livestock wells by prohibiting production fees, taxes, or meters on those wells. The new district cannot seize land via eminent domain as most MUDs and WCIDs may.

Citizens of Lakeway/Hills of Lakeway, Bee Cave, and West Lake are on surface water and will not be affected or financially impacted by the new district. The Board of Directors is prohibited from assessing taxes, and district permitting and metering requirements will not apply to exempt well owners though they may be assessed modest administrative fees. The regulated community will be a small set of non-exempt users who pump much larger amounts of groundwater from the Trinity Aquifer, including irrigated golf courses; commercial and industrial users; and MUDs, WCIDs, and public water suppliers on groundwater.

The district’s temporary Board of Directors was hand-picked by Senator Dawn Buckingham, Representative Paul Workman, Commissioner Gerald Daugherty, and Travis County Judge Sarah Eckhardt — and guided an election process that confirmed the district and elected a Board of Directors. That election was held on November 5th with 75% approval. Local voters elected one director each from the cities of West Lake Hills, Bee Cave, and Lakeway; and four rural at-large directors who beneficially use groundwater.

The state’s rulebook for the management of groundwater is Chapter 36 of the Texas Water Code. The Legislature recognizes that locally controlled GCDs are the best entities to protect the natural resource and to gather science for effective management. HB-4345 of the 85th Legislature contains the language that authorizes the limited power of the new GCD and no management or regulatory rules may be written that exceed the powers written into that statute.

Officials from the existing GCDs that surround the new district are lending experience and guidance in its formation. They helped guide the election process, provided existing scientific data to help guide the management rule making process, and lent support in creating an administratively functional district.

At the March 2nd, 2019 Board meeting, the Board voted (5-0 with 2 absences) to postpone the election due to the financial liability that would be imposed on the yet solvent district by the high election costs (~ $250,000) calculated by Travis County. Travis County Commissioner’s Court offered to loan the District those funds, but the Board felt it fiscally imprudent to assume such a loan without a current revenue stream. The election was postponed until November 2019.

On April 4, 2018, the House Natural Resources Chair Representative Lyle Larson submitted a request for opinion to the Attorney General’s office on behalf of Representative Paul Workman. That request will act to clarify some points of question regarding enabling legislation and the authority of the District’s appointed Board of Directors.  Those four questions are as follows:

Attorney General Ken Paxton is expected to rule on these questions in the upcoming months. Until then, the SwTGCD Board of Directors appears to be in a state of legal uncertainty and will proceed with District business as it is able. 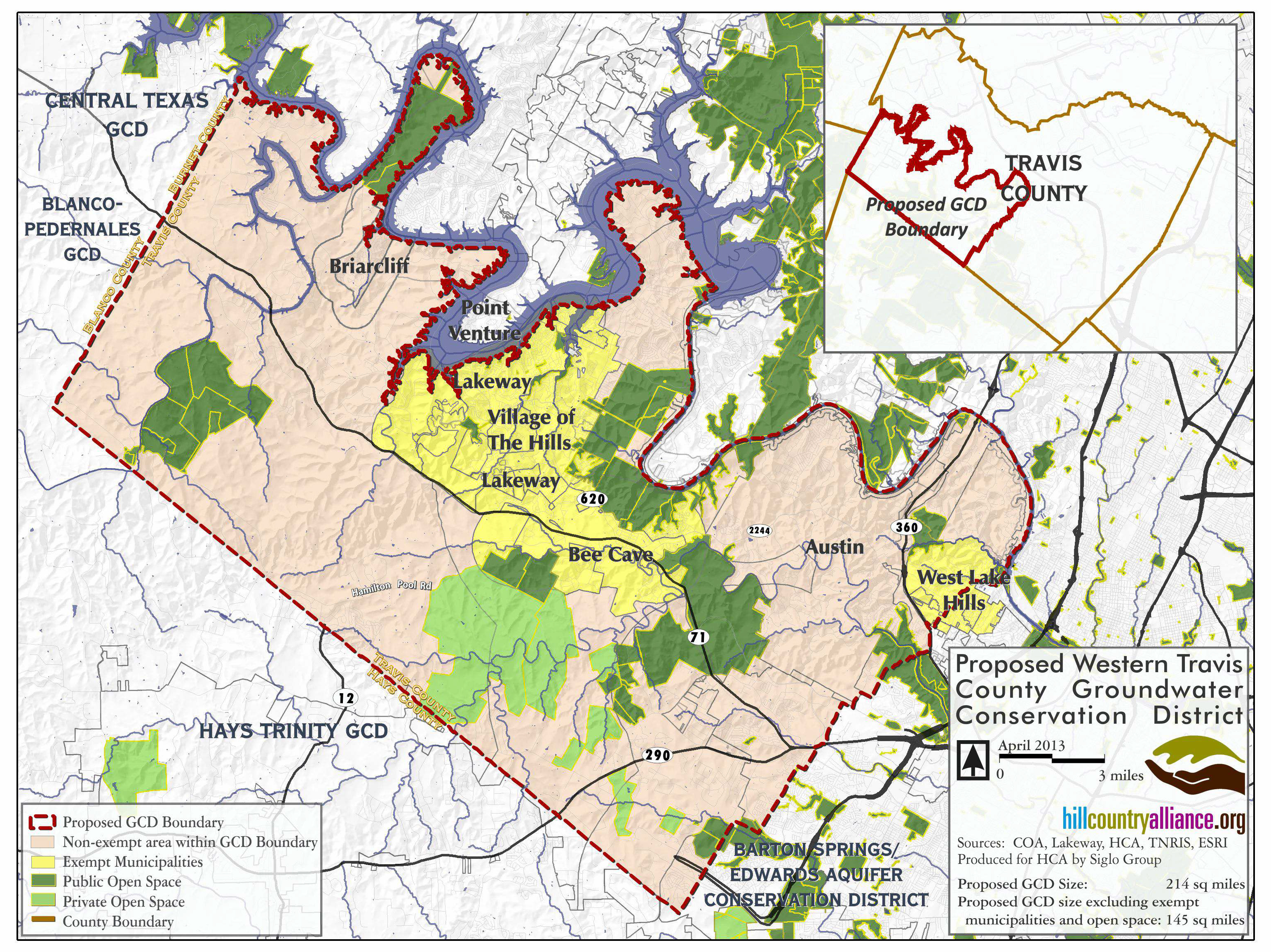 The nascent district is the result of many years of effort to create a reliable custodian of the aquifer. The initial report recommending the creation of a district was initiated in 1990 by the Texas Water Commission.  That report recognized that population growth across the Hill Country would deplete the aquifer unless conservation measures were implemented.  Falling aquifer levels led to 2001’s Senate Bill 2 which mandated that threatened counties that had not created districts do so immediately. Further unsuccessful attempts in 2007 and 2009 to legislate a western Travis County GCD prompted the Texas Commission on Environmental Quality to deliver a 2010 report recommending that the Commissioners create a multi-county GCD by agency rule. Several other bills authorizing a district failed in the legislature until the final passage of 2017’s successful HB-4345.

That bill’s success was due in large part to local recognition that rapidly declining aquifer levels were threatening water wells and springs, and if unabated would threaten surface water sources and harm the region’s economic viability.

The stakeholders in Travis County including elected officials, municipal administrators, and local residents collaborated to create guidelines for a new GCD that respects private property rights while protecting the source of many people’s only water supply. Those guidelines were incorporated into HB-4345 and are now reflected in statute.

The new District will allow for local input into the aquifer’s long-range planning processes in which the level of the local aquifer is assured.

A brief on the history of the Southwestern Travis County GCD creation:

Get Involved
Donate
Subscribe
Shop
Hill Country Alliance
Mission and Principles Our Programs Texas Hill Country Conservation Network Staff Board of Directors Partners History Testimonials Contact Us
Follow Us
HCA Issues
Water Resources Land Stewardship Planning and Development Night Skies Legislature and Regulation Scenic Beauty
"All my life I have drawn sustenance from the rivers and from the hills of my native state... I want no less for all the children of America than what I was privileged to have as a boy."   -Lyndon B. Johnson
Donate
Copyright 2015 - All Rights Reserved