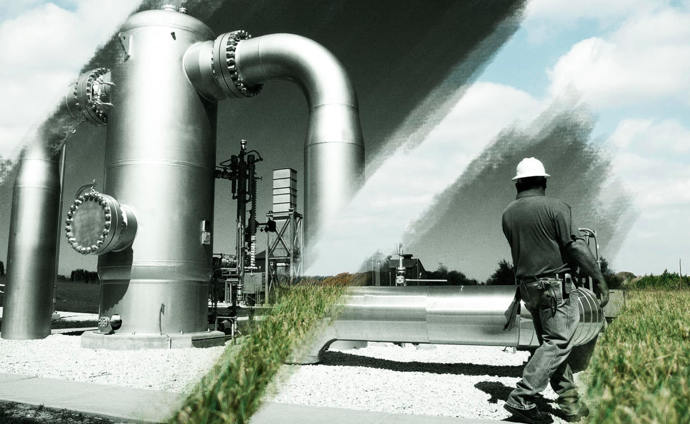 The state’s biggest industry finds itself in an unusual position: facing landowner-friendly reforms at the Texas Legislature.
On the day of the explosion, Randy Zgabay’s grandmother kept him inside. His grandfather would usually hold Randy, who was only eighteen months old, while his seven-year-old-sister, Laura, played in the pasture near his grandparents’ home in Rosenberg, a small town southwest of Houston. But on this August day in 1966, his grandmother just had a feeling: Randy should stay inside the house with her.
With no warning, the natural gas pipeline exploded about three feet from Laura and her grandfather, engulfing the field in flames. In her haste to get away, Laura ran into a barbed-wire fence; the fire singed her eyebrows and face before her grandfather pulled her to safety. “I felt this hand pull my left arm,” she says. “We walked back to the house, and they put me in front of this great big AC unit, and I remember Granny rubbing some vaseline out of a brown jar.” When Zgabay was older, his grandfather often told him that he wouldn’t have been able to save both him and his sister if Randy had been in his arms.
Now 54 and living in the Hill Country, Zgabay’s childhood near miss has taken on new meaning. In October, he received a notice from Kinder Morgan, the Houston-based pipeline giant, that a portion of a 430-mile natural gas pipeline from the Permian Basin to the Houston area was slated for his 28-acre ranchette in Fredericksburg. Called the Permian Highway Pipeline, the $2 billion project threatened to gobble up 360 pecan trees that Zgabay had planted over the past fourteen years as a source of retirement income. Best he could tell, the 42-inch pipeline would also cross under the home plate of the baseball field he built for his son. But then in April, Kinder Morgan representatives told him they were shifting the pipeline route across the road onto his neighbor’s place. Zgabay is far from relieved. He estimates the Permian Highway will still be 1,200 feet from his house and 400 feet from the baseball diamond.
Read more from Mark Dent with Texas Monthly here.