Light Pollution and Why it Matters

On the Edge of Night 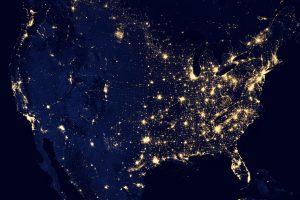 Although light pollution is an issue all over the world, the Texas Hill Country is in a unique situation to preserve and restore our night skies. As seen in the photo on the right, the Interstate 35 corridor splits both Texas and the United States in half. To its east is a nighttime landscape dominated by artificial lighting that stretches to the East Coast. To its west lies a less inhabited landscape, famous for its starry skies. While the eastern half of the United States is greatly polluted by artificial lighting, the western half remains relatively dark.

In the Hill Country, we are located on the border of this light polluted east and less light polluted west. We call this living on ‘the edge of night.’ As a result, we are in a unique geographic location to help prevent the spread of light pollution westward across the continent.

As the Hill Country grows, it is increasingly important to take action to preserve our night skies. Restoring the stars’ brilliance against an unpolluted sky and reducing the harmful impacts of light pollution can be accomplished through awareness, proper planning, and action. Visit our Get Involved page to find out how you can join us in the preservation of Hill Country night skies.

What is Light Pollution?

Simply put, light pollution is wasted light in the natural environment. This is a manmade problem, caused by overly bright, outdoor lighting that shines when or where it is not needed. Light pollution generally falls into four categories: skyglow, light trespass, glare, and light clutter.

Light pollution is also a completely solvable problem – you can avoid the following negative effects of light pollution by making informed choices when installing lighting features in your own backyard and within your community. 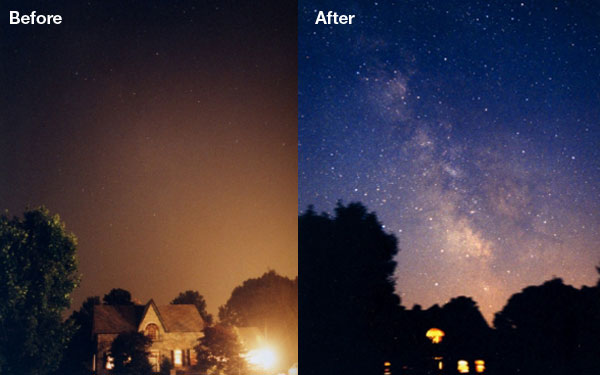 Do you notice the hazy sky to the left in the “Before” image? When light shines upward into the night sky, it reflects off of particles in the atmosphere and creates a visible haze. This effect is called skyglow. Skyglow impedes the view of stars in the night sky for both humans and the many nocturnal animals that navigate by the stars. 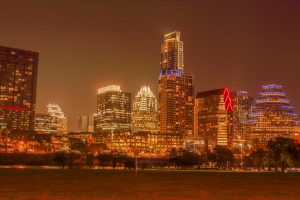 Just as a countertop can become overwhelmed with clutter when things get busy, communities can also suffer from clutter. When big cities – or in some cases, small towns – are flooded with excessive amounts of artificial light, they develop light clutter. These sources of light are often confusing, cause unsafe glare, and lead to an inability to see far beyond the light sources.

When light shines across property lines, it is called light trespass. Shielding and aiming a light so that its throw ends at the property line is the best solution. 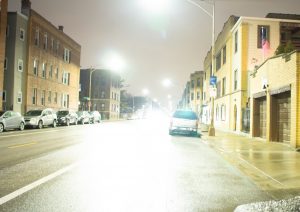 Glare is caused by light shining directly from the source into the eye. It constricts our pupils and makes it harder to see into the shadows, decreasing visibility, often having the opposite of its intended effect. 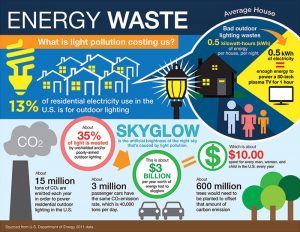 Light pollution wastes money and energy. According to the International Dark-Sky Association, at least 30 percent of all outdoor lighting in the U.S. is wasted by shining where it is not intended. This waste comes mainly from lights that are not shielded or are poorly aimed. That amount of wasted outdoor lighting comes at a cost of about $3 billion nationally per year.

Our region is home to incredible and unique biodiversity. The insects, amphibians, birds, bats, fish, deer, and other wildlife that live here have all evolved to thrive in a world with bright days and dark nights. From disrupting physiological processes to reducing nocturnal foraging opportunities, artificial light at night negatively impacts a multitude of living things in the Hill Country and throughout the world. 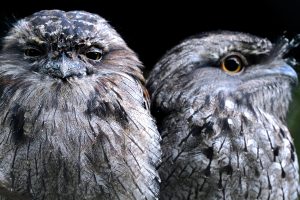 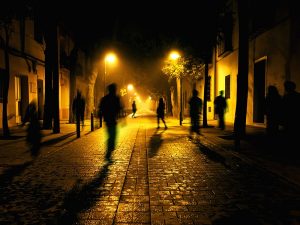 Every night we are surrounded by artificial light from our cell phones and computers, our interior home lighting, and from outdoor light pollution in the form of light trespass and skyglow. Exposure to artificial light at night suppresses the production of melatonin in our bodies. Melatonin suppression has been shown to negatively affect our health by increasing the risk of obesity, sleep disorders, diabetes, breast and prostate cancer, and depression.

It is a common misconception that more lighting creates a safer environment, however no studies have shown this to be the case. In fact, glaring light often impedes our vision by constricting our pupils, which hinders our ability to see into the shadows. Glare also impacts the ability of our eyes to adjust to low-light conditions. 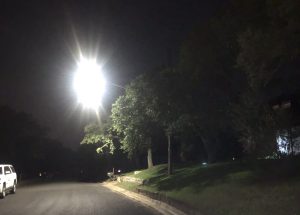 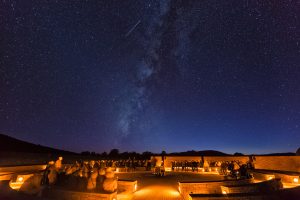 Light pollution in cities makes it necessary for people to travel away from their homes just to see star-filled skies. As a result, rural regions all over the world are seeing increases in tourism–this is called astrotourism. The Texas Hill Country is home to an increasing number of IDA Designated Dark Sky Parks and Communities. These designated places are popular astrotourism destinations for travelers from around the world who seek the natural beauty of night skies. Keeping Hill Country skies free of light pollution helps to ensure the economic health of our region for generations to come.

Stepping outside on a cool, clear Hill Country night to gaze at the stars helps us escape the fast pace of our daily lives. The experience of a dazzling night sky inspires art, writing, poetry, photography, curiosity and space exploration. It is a part of our human heritage and a special part of our region’s identity. Errant artificial light floods peaceful natural skies making stargazing a thing of the past, something future generations may never experience. The future of our night skies depends on all of us. Visit our Get Involved page to learn how you can join us in keeping our night skies dark. 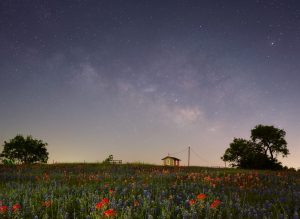 Additional Information on the Impacts of Light Pollution

To wish upon a star: Exploring Astro Tourism as vehicle for sustainable rural development

The 2022 winners in the "Snapshot of the Hill Country" photo contest have been chosen, and you can hang their work on your wall with a 2023 calendar. The Hill Country Alliance contest "challenged photographers to capture the fleeting beauty of life" in the region,...

END_OF_DOCUMENT_TOKEN_TO_BE_REPLACED

Central Texas lies within the main corridor of North American bird migration with flocks of aviators flying south for the winter and vice versa for the summer. But despite the innate directional awareness, some birds can get confused or harmed by lights shining in our...

END_OF_DOCUMENT_TOKEN_TO_BE_REPLACED

‘The Olympics of astronomy’: Travis County gears up for 2024 solar eclipse

END_OF_DOCUMENT_TOKEN_TO_BE_REPLACED

Natural light cycles have been obscured for years by artificial light used at night. According to experts, this has an impact on both human and animal behavior. Numerous nocturnal animal behaviors and many others like them have evolved to benefit from the night's...