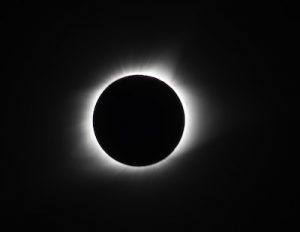 What is an eclipse?

Eclipses occur when one object passes in front of another or when an object passes in between two aligned objects. Many objects in our solar system can eclipse each other; however, our Moon, our Sun, and the Earth are most important to us. A lunar eclipse occurs when the Moon passes through the Earth’s shadow. For a solar eclipse to occur, the Moon must pass in between the Earth and the Sun. This passing casts a shadow on the Earth, and only those in the shadow can witness the eclipse. When the Moon is furthest from us (at apogee), only part of the Sun is covered, and this is known as an annular solar eclipse. When the Moon is closest to us (at perigee), the Sun is fully covered, yielding a total solar eclipse. Click here to learn more about solar eclipses.

In the coming years, the Hill Country will play center stage to two phenomenal solar events. On Saturday, October 14, 2023, an annular solar eclipse will occur. A total solar eclipse will take place almost six months later, on Monday, April 8, 2024. The 2023 eclipse path of annularity will begin on the coast of Oregon and sweep northwest to southeast across the United States. It will enter Texas crossing over the Panhandle Plains and the Permian Basin, making its way down to the Gulf Coast. In the Hill Country, it will be seen as far north as Fredericksburg, as far south as Uvalde, to the west in Rocksprings, and New Braunfels in the east. At the centerline, annularity will last just a few seconds shy of five minutes. The 2024 eclipse path of totality will play opposite to 2023, entering the United States and Texas at the southeastern-most tip of the Hill Country and making its way northeast, eventually departing up in the Piney Woods region of the state. While some eastern parts of Travis, Hays, Comal, and Bexar counties fall outside of the path of totality, their county’s western areas will bear witness, as will all the other counties of the Hill Country. At the centerline, observers will get almost four and a half minutes of totality.

It is reasonable to expect hundreds of thousands of visitors in the Hill Country for the total solar eclipse of 2024. The last total solar eclipse in the U.S. was in 2017. It didn’t cross Texas, but visitors inundated the places it did. While these crowds tend to be respectful and well-behaved, their impacts on local communities, positive and negative, can be significant and call for considerable preparation. For this reason, the Hill Country Alliance is supporting the formation of task forces in each Hill Country county. Additionally, HCA is convening quarterly round table meetings of these task forces to update one another on preparations, coordinate activities, and resources where practical, and hear from professionals around the country who have experience with eclipse preparations. To learn more, email Dawn@hillcountryalliance.org.

Round Table Meetings – Past