Clean, clear pristine rivers and streams in Texas support the state’s vibrant tourism and recreation-based economies and contribute known value to the lands that surround them, both public and private. Wastewater is the last thing we need in our remaining pristine streams.

Currently, advocates are working on a strategy to change the rules at the Texas Commission on Environmental Quality (TCEQ), the entity in charge of overseeing environmental regulations. With a new rule in place to protect the specified stream segments, applicants who once may have sought a wastewater discharge permit will be directed to apply for a Texas Land Application Permit (TLAP) and to consider the addition of a Chapter 210 Reuse Authorization for one or more other beneficial uses.

The rule would protect several of the Hill Country’s most iconic streams, including portions of the Blanco, Llano, and Nueces Rivers, as well as smaller streams like Barton, Cypress, and Hondo Creeks. Supported by landowners, community groups, conservationists and local governments, this proposal is a fair, balanced and necessary action to protect the last pristine streams in Texas. 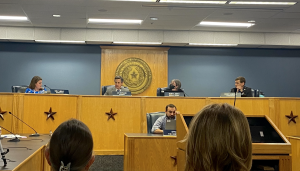 Photo of TCEQ Commissioners at dais during the public hearing on the Pristine Streams Petition on March 30, 2022. – Credit: Sydney Beckner

August : A public meeting has been scheduled to discuss a path forward to protect the less than 1% of pristine stream segments in the state.

March : At the public hearing on the Pristine Streams Petition, the TCEQ Commissioners heard testimony from a number of concerned citizens across the state on how protecting these few remaining streams is important. However, the Commissioner’s ultimately denied the Petition in a 2-1 vote, but as Chairman Jon Niermann acknowledged during the meeting, “The waters at issue here are state treasures,” and opened his door to a public meeting just on this topic. HCA and our partners have taken the Chairman up on his offer and look forward to the meeting scheduled in August of this year.

January : A broad coalition of landowners and advocacy organizations filed a petition to the Texas Commission on Environmental Quality (TCEQ) to accept a new rule that prohibits wastewater discharge into 22 stream segments where the addition of phosphorus will degrade water quality. A public hearing was scheduled for March.

During the 86th Texas Legislative session, HB 4146, known as the “Pristine Streams Bill”, unanimously passed the House Committee on Environmental Regulation with bipartisan support. Unfortunately, the bill championed by Rep. Tracy King and supported broadly by environmental and landowner organizations, died in Calendars without being heard in the Senate. While this effort failed to become law, this bill made it further than any previous bill on wastewater discharge ever had, a success worth celebrating. 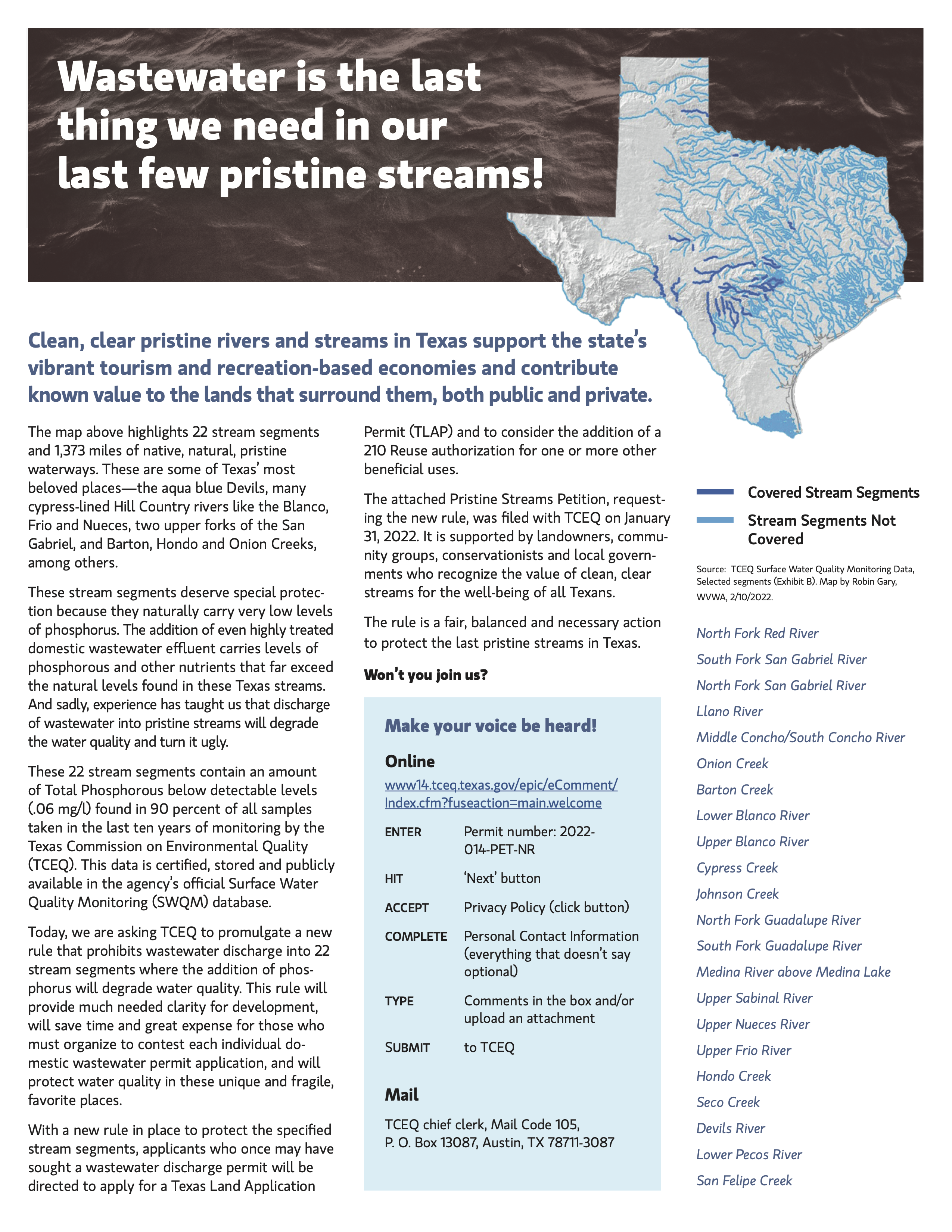 Wastewater is the last thing we need in our pristine streams!

Clean, clear pristine rivers and streams in Texas support the state’s vibrant tourism and recreation-based economies and contribute known value to the lands that surround them, both public and private.

Sky Marshal Jones-Lewey (May 26, 1958 – May 31, 2022) dedicated her life, work, and passion to protecting Texas’s rivers and in doing so, touched the hearts and minds of thousands of Texas landowners, paddlers, and river advocates. Several important campaigns that Sky championed remain unrealized. One of the most urgent is to protect Texas’ few remaining pristine streams. In partnership with Sky’s incredible family, including her children Jeff and Julie Lewey, the Hill Country Alliance established the Sky Lewey River Protection Fund. This fund will be used to ensure that Sky’s legacy continues and the work to protect her Nueces River – and all the rivers of our state – carries on.

Donate in Honor of Sky

“Everything we do on the land is eventually reflected in a river. That’s why it’s so important to think about the whole landscape, how big and little pieces fit together.” 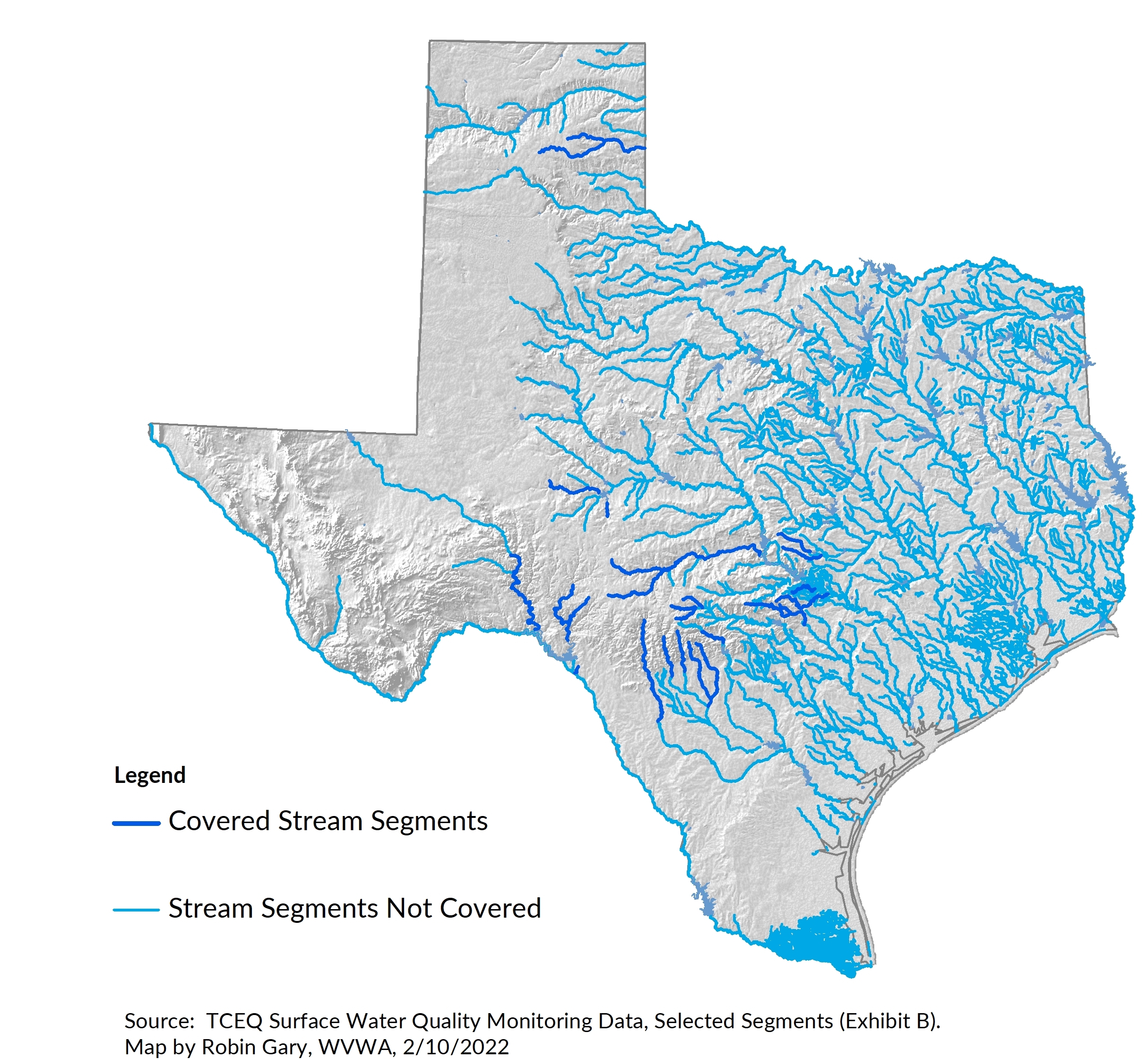 If proposed new rules are accepted, the stream segments shown in dark blue would be protected from further degradation due to wastewater discharge. Map by Robin Gary, Wimberley Valley Watershed Association.

The map at left highlights 22 stream segments and 1,373 miles of natural, pristine waterways. These are some of Texas’ most beloved places and are in need of protection. The below stream segments would be covered under the new rule change petition. These stream segments deserve special protection because they naturally carry very low levels of phosphorus. The addition of even highly treated domestic wastewater effluent carries levels of phosphorous and other nutrients that far exceed the natural levels found in these Texas streams.

Past Advocacy on Pristine Streams 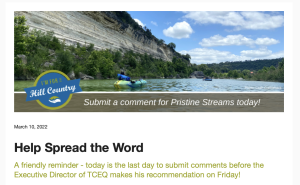 The TCEQ Commissioners meet Wednesday, March 30 to make a decision on the Pristine Stream Petition. Make sure they hear from you! Filed January 31, this petition requests the TCEQ to accept a new rule that prohibits wastewater discharge into 22 stream segments where the addition of phosphorus will degrade water quality.

On March 8, 2022 the City of Blanco approved a resolution in support of the Pristine Streams Petition.

On March 8, 2022 Edwards County approved a resolution in support of the Pristine Streams Petition.

On March 14, 2022 Real County approved a resolution in support of the Pristine Streams Petition.

On March 15, 2022 the City of Bandera approved a resolution in support of the Pristine Streams Petition.

Kathleen Tobin Krueger stood on a low cliff last week, looking down on her family’s ranchland. Below her lay an expansive field laden with smooth white rocks, trees with exposed roots growing between them. There should be a full, flowing river here — there usually is...

END_OF_DOCUMENT_TOKEN_TO_BE_REPLACED

With at least two months of a hot Texas summer left, the Blanco County water situation is becoming a serious concern. Water levels continue to decline in District Monitor Wells. Some well owners have had to lower pumps. Blanco County rainfall for 2022 is currently...

END_OF_DOCUMENT_TOKEN_TO_BE_REPLACED

Commentary: Drought, growth and the future of the Hill Country

On Thursday, June 9, the North Llano River stopped flowing. On August 4, the U.S. Drought Monitor showed 80 percent of the Texas Hill Country in exceptional drought. The Pedernales, Guadalupe and Frio Rivers are dry, and many other Texas rivers are heading toward zero...

END_OF_DOCUMENT_TOKEN_TO_BE_REPLACED

On Thursday, Spring Branch residents will get the chance to ask questions and voice their concerns over a permit that would allow up to 260,000 gallons of treated domestic wastewater to be deposited daily into Cypress Creek and then into the Guadalupe River, according...