A river worth saving: Who will protect the unheralded Llano? 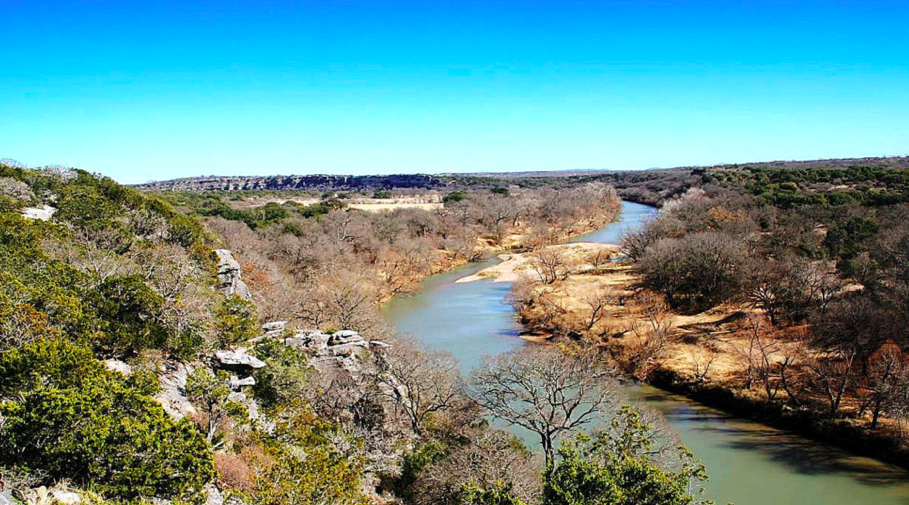 The Llano River is an ecological gem in Texas Hill Country, supporting dozens of native and rare plants and animals. But due to weak state environmental protections, the Llano — along with other waterways in Texas — is increasingly facing pressure from industry and development.
On a February day in 2018, Bill Neiman walked me along the perimeter of a Pilot Flying J truck stop in Junction, Texas, five miles upstream from his farm. Semis revved and hissed in the 24-lane fueling station — some bracing for the long haul across the desert on Interstate 10 — as Neiman sidestepped trash in his muddy boots, knelt to the concrete, and motioned for me to kneel with him.
He pointed to the pavement. It was concave, like a locker room shower, inclined toward a central drain.
“Every drip of what’s coming out of those trucks: hazardous waste, fracking fluids, not to mention spills at every fueling lane of diesel, axle grease, transmission fluids,” he said in a penetrating North Texas twang, “the first flush during a rain, it all goes through the drains and into that concrete flume.”
He pointed beyond the chain link fence, off the truck stop property. “That flume goes right to the river and dumps it all in the water. Never touches land.”
The town of Junction gets its name from the nearby confluence of the North and South Llano River. From there the emerald waters of the Llano proper flow 100 miles through a mosaic of mesquite and cedar, rocky outcrops, and open rangeland. It then runs right into Texas’s Colorado River to form Lake Lyndon B. Johnson, one of six reservoirs built to manage floods and sustain Austin’s water supply. But Neiman and others upstream think of the river as a gem of Texas Hill Country — a wild and scenic river, but without Wild and Scenic River status.
In fact, in Texas, only a 196-mile section of the Rio Grande in the Big Bend benefits from the federal protection warranted through the 1968 Wild and Scenic River Act. The other nearly 191,000 miles of Texas waterways are potentially subject to the demands of private enterprise: sand mines, dams, fracking, private wells, and so on.
Or, in the case of the Llano, a concrete flume that delivers effluent to the flowing river.
Read more from Austin Price, first prize winner of the 2020 Young Writers Award Winner from Yale Environment 360 here.