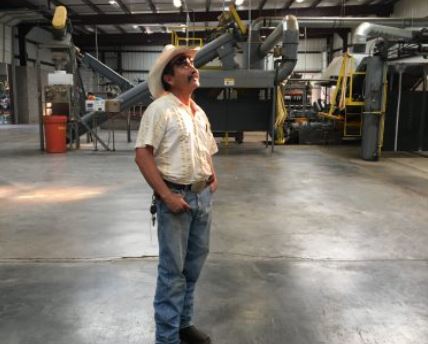 The hotly-contested Trans-Pecos Pipeline went into service in West Texas one year ago this month, amid protest from local opponents over private property disputes and environmental impacts. The aim of the Mexican-backed project was to export natural gas from the Permian Basin across the border. But one year in, Mexico is still not using any of the gas. And residents of the Big Bend have been feeling some of the pipeline’s impacts lately.
Mae Ridgway lives in a pink adobe house, on a quiet stretch of land along the Texas-Mexico border.  A couple of weeks ago, she heard something weird in the middle of the night.
“When it woke me up, I thought, is that the refrigerator? Because the doors and windows were all closed,” says Ridgway.
It sounded like like a jet engine warming up on the runway. She walked outside, and realized where the noise was coming from: the Trans-Pecos Pipeline. It’s a 148-mile natural gas line running from Pecos County to the Rio Grande, just down the street from Ridgway’s house. What she heard was the sound of gas being vented from the pipeline – nearly 7 million pounds of it, over a 30 hour period that began that night.
Read more from Sally Beauvais with Marfa Public Radio here