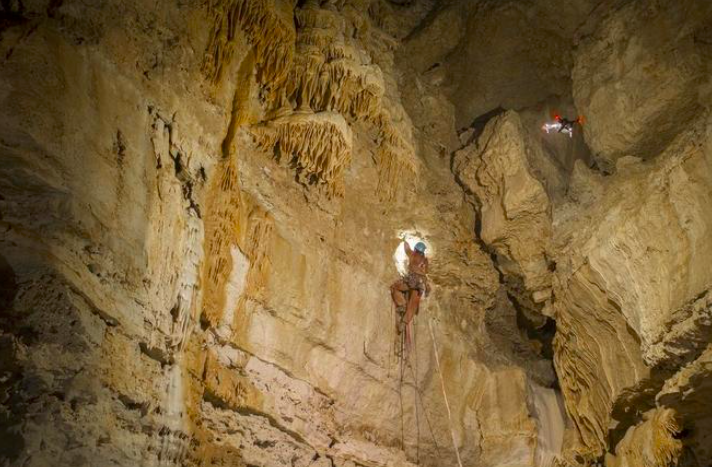 After six hours of trekking through cappuccino-colored muck last week, a team of cavers entered a previously unexplored 600-foot-long passage inside Natural Bridge Caverns.
The passage, located 145 feet underground, is full of mineral-rich pools of water bordered by mounds of ice-like crystals.
“It is absolutely beautiful and the most spectacular cave ‘ice’ that we’ve ever seen at Natural Bridge Caverns,” said Brad Wuest, president and CEO of the caverns.
The team of 14 explorers wedged and wriggled their way through the caverns, which are north of San Antonio and south of Canyon Lake, on May 8. The idea to search the passage, however, dates back to 1960, when college students first discovered the caverns. One of those original discoverers, Orion Knox, 78, was on the trip this month, Wuest said.
The group started their trek at 11 a.m. where daily visitors typically exit a tour, moving for about 1½ miles through long-established sections of the cavern before reaching the “dome pit.” The pit is a massive room in the cavern’s limestone that explorers found back in 1960, but couldn’t get past.
Read more from Kelsey Bradshaw with Austin American-Statesman here.