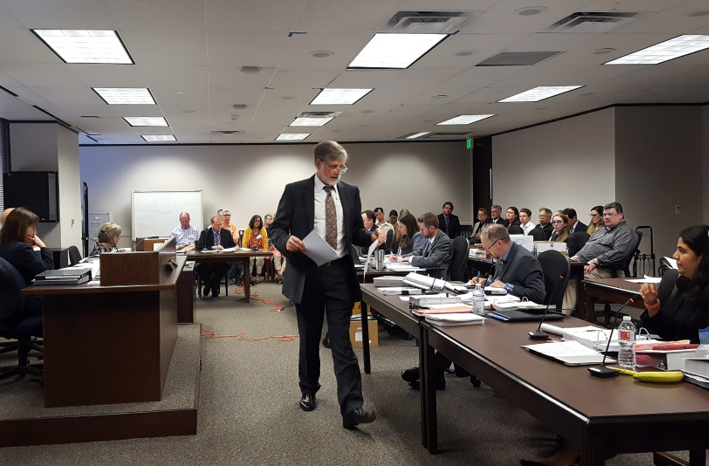 External Article – By Stop 3009 Vulcan Quarry
In the fall of 2018, hundreds of citizens and groups in Comal County continued the fight against Vulcan Construction Materials’ proposed 1500-acre limestone quarry, located over the Edwards Aquifer between New Braunfels and Bulverde—just north-east of San Antonio.
These individuals and organizations, actively opposing the air quality permit application by Vulcan, obtained a contested case hearing from the State Office of Administrative Hearings (SOAH). At the preliminary hearing on March 6, 2019, Vulcan and TCEQ attempted to arbitrarily limit the number of affected parties to those within a one-mile radius of the proposed rock crusher—including fewer than ten property owners.
However, the administrative law judge presiding over the hearing, Rebecca Smith, sided with area residents and allowed those that testified who live within a five-mile radius to be listed as affected parties. This included approximately 80 households and several nonprofit organizations such as Stop 3009 Vulcan Quarry, Friends of Dry Comal Creek, Greater Edwards Aquifer Alliance, and the Comal Independent School District.
At the trial portion of the contested case hearing held in June 2019, the SOAH judge admitted more comprehensive evidence presented by area citizens, heard cross-examination of expert witnesses, and will issue a decision by September 3, 2019.

Preserving Our Hill Country Environment
Known for its friendly people, tranquil environment, and unique natural features, the Texas Hill Country has an increasing reputation as an eco-tourism destination. Tubing stream-fed rivers, watching the largest colony of bats in the world, stargazing into the clear night sky, and exploring numerous caves and caverns are just a few of the natural wonders residents and visitors alike enjoy.
Unfortunately, those unique attractions and experiences could be endangered by the blasting, mining, and crushing operations of this proposed 1500-acre Vulcan quarry and other similar aggregate and concrete facilities being proposed throughout the Texas Hill Country, in places from Boerne to Marble Falls, and from Dripping Springs to Kerrville.

Why the Opposition?
In July 2017, Vulcan submitted an air quality permit application to the Texas Commission on Environmental Quality (TCEQ) to convert a 1500-acre plot of land known as the White Ranch into a limestone quarry and rock crushing plant. Obviously this was disconcerting to the neighboring residents and citizens of Comal County. But why?
For starters, in the state of Texas, aggregate miners such as Vulcan are subject to very minimal oversight and supervision. They are not required to perform any environmental impact reviews. Blasting, mining, and product transport operations are completely unregulated. While common-sense supervision of these activities is required in most states, Texas only evaluates the actual rock-crushing machinery when granting an air quality permit for a quarry. Even in Texas, other surface mining activities such as coal and uranium are subject to regulation—but not aggregate mines like the quarry Vulcan proposes.
Possible Negative Impacts
The operations of a rock crushing quarry are often detrimental to air quality, water quality, and water supply.
One of the most dangerous contaminants, crystalline silica, is extremely harmful to humans and wildlife, causing shortness of breath, coughing, eye irritation (even for otherwise healthy individuals) and can exacerbate other pre-existing conditions like asthma. Already, the San Antonio-New Braunfels metro area has pediatric asthma rates of 1 in 7 (nearly twice the national average) and Comal ISD already has over 2000 students with an asthma health alert on file. Particles produced by rock-crushing operations will likely increase air pollution and worsen this health risk for area students.
Studies have also established strong links between the particulate matter pollution emitted by quarries and health problems including silicosis, COPD, lung cancer, emphysema, cardiovascular disease, and auto-immune disease.

Aggregate operations also use tremendous amounts of water. As we all know, in Texas, water availability is critical. A quarry using massive amounts of water in an area that already has a stressed water supply will only exacerbate the situation for the over 12,000 residents living nearby.
But this is not just another “not in my backyard” matter. The proposed quarry site stretches for nearly three miles entirely over the Edwards Aquifer Recharge Zone—one of the most environmentally sensitive areas in Texas. In addition to serving as the primary water supply for over 1.7 million people, this region is home to seven endangered species unique biota, thousands of natural springs, and the creeks and rivers they feed.
Because of the unique karst hydrogeology characteristic of the Edwards Aquifer, pollutants that enter the Recharge Zone can travel quickly through the aquifer and contaminate water sources in a very short period of time—sometimes as little as hours. Since this recharge zone is so critical in maintaining a clean and healthy water supply for the region, additional measures are typically required to reduce the risk of contamination. However, the Vulcan air quality permit application contains no water-related restrictions or protections whatsoever.
Fighting Vulcan and TCEQ
On February 27, 2018, over 500 citizens showed up in New Braunfels for a five-hour public meeting, with dozens of citizens speaking out against Vulcan and urging TCEQ to deny the pending permit application. Both the Bulverde City Council and Comal ISD Board of Trustees unanimously passed resolutions opposing the permit.
But several months later, on September 14, TCEQ ignored pleas from these citizens and issued draft approval for Vulcan’s requested air quality permit. This also triggered a 30-day window during which hundreds of area residents and opposition groups requested affected party status and a more in-depth contested case hearing on the pending permit.

On December 12, TCEQ commissioners denied the vast majority of these requests, granting affected party status to only eleven property owners and three groups.
Thankfully, at the preliminary SOAH hearing held in New Braunfels on March 6, 2019, the SOAH administrative law judge overruled the arbitrary limitations Vulcan and TCEQ attempted to impose. Instead, she granted affected party status to all residents who testified that live within a five-mile radius of the proposed rock crushing facility.
The hearing on the merits (trial) portion of the contested case hearing took place in Austin on June 10-11, 2019. The trial began with the admittance of a core rock sample from a next-door neighbor’s property—just 30 feet from one of the Vulcan core sample sites. This core sample was tested by an independent lab and showed crystalline silica concentration five times higher than what Vulcan presented at the hearing.
On the witness stand, Vulcan employee Lori Eversull testified that Vulcan obtained core samples at 41 different sites throughout the property to determine economic viability. Yet they only presented a single, self-selected composite sample from three locations for air pollution modeling purposes. Core samples from most of the 38 other locations “had been destroyed” and Vulcan has still not provided this data to TCEQ or area residents.
TCEQ personnel stated that they used “nearby” air quality monitors to model background and cumulative air pollution. However, the monitors they used for this permit (Selma and Heritage Middle School) were located 12 miles and 28 miles upwind from the proposed quarry location. None of the modeling data in the permit included any air quality data from Comal County, despite the fact that over 20 aggregate, concrete, and cement facilities are located in the county.

Additionally, TCEQ toxicologist Jong-Song Lee admitted that health hazards like silicosis are directly related to the amount of crystalline silica emitted by all quarry operations (not just the rock crusher). Despite this clear health risk, TCEQ does not consider any air pollution from the quarry activities themselves—mining, blasting, product transfer, truck exhaust, etc.—the permit only covers and restricts pollution from the actual rock crusher.
Parties recently filed written closing arguments and the SOAH judge will render a decision by September 3, 2019. A range of decisions could be made, from allowing the permit to be granted as is, recommending a complete denial, or some sort of partial approval with the implementation of additional restrictions and requirements. Visit www.stop3009vulcanquarry.com or follow Friends of Dry Comal Creek on Facebook for future news and updates.
Ongoing Legislative Efforts
While fighting against this specific facility, these citizens, groups, and other organizations such as Preserve Our Hill Country Environment and Texas Environmental Protection Coalition pushed hard for passage of several good bills presented during the past legislative session.
Working together with state representatives such as Kyle Biedermann (R-Fredericksburg), Terry Wilson (R-Marble Falls), Erin Zwiener (D-Driftwood), and other supportive legislators, these citizens helped draft and support legislation that would bring meaningful change and common-sense supervision to the freewheeling aggregate and concrete industry.  Together, we were able to kill one of the worst aggregate bills filed this session (HB 3114). If passed, it would have gutted the impartiality of certain TCEQ hearings.
Unfortunately, powerful industry lobbyists such as Texas Aggregate and Concrete Association (TACA) which are funded in part by out-of-state corporations like Vulcan Materials, actively opposed these citizen-led efforts to help protect our state’s residents and natural resources. TACA alone contributed tens of thousands of dollars to key committee chairs and members in both the House and Senate—nearly two million dollars over the past ten sessions.
As a result, none of the good bills we supported were passed into law. Despite hundreds of citizens testifying in support of these bills at the Capitol, and thousands of phone calls and emails, this legislation was not supported by enough committee members.
But citizens of the Texas Hill Country refuse to back down or be intimidated by out-of-state corporations or powerful lobbyists. We will continue to fight against those who want to pollute our state, endanger our health, and jeopardize our precious natural resources.
Learn more from Stop 3009 Vulcan Quarry here.