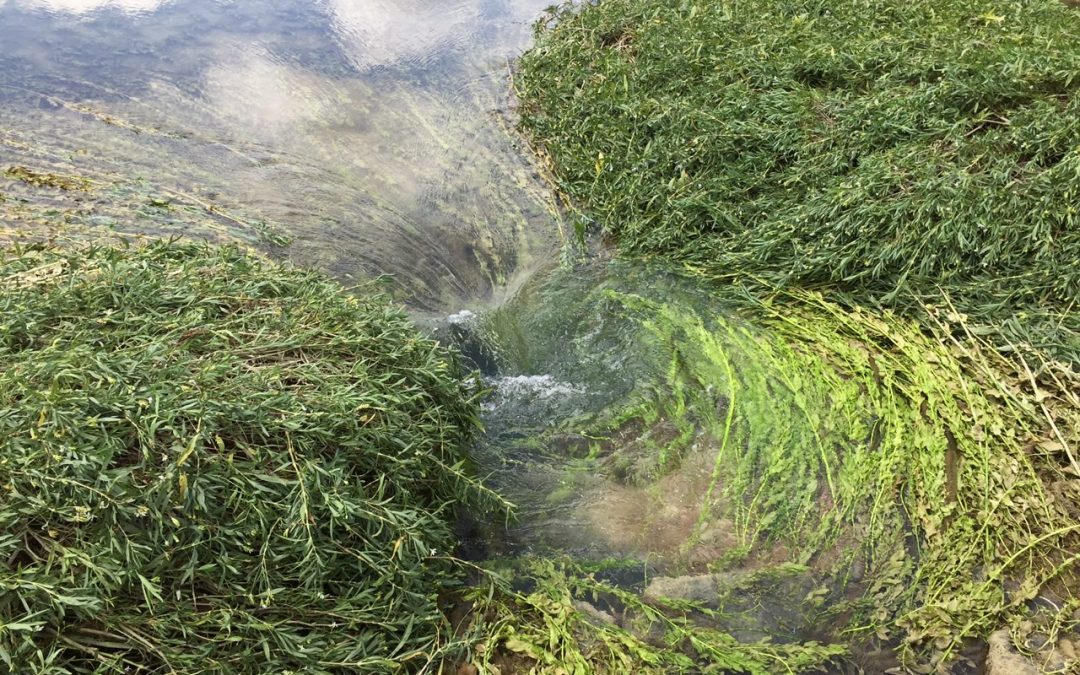 Updated Technical Note on Cypress Creek Collapse Feature: July 17th, 2017
Jeffery Watson, Doug Wierman, Michael Jones
On July 6th, 2017 Jeffery Watson (Hydrogeologist, HTGCD), Doug Wierman (P.G., Hydrogeologist, Meadows Center), and Michael Jones (Water Resource Specialist, Meadows Center) visited the location of a collapse feature in Cypress Creek that was reported to have formed on Monday, July 3rd. We were joined by Paula Cocke and Brian Robinson from Aqua Texas Inc. The DD coordinates of the feature are 30.01832/-98.11465, approximately 5 feet upstream of a concrete dam.
The dam has three iron sewage pipes passing underneath it that are operated by Aqua Texas. The depth of these pipes underneath the dam is unknown. It appears that one of the pipes has been decommissioned and is not in use and that an additional smaller pipe that may carry electric lines or conduit is also likely decommissioned and not in use.  Please contact Aqua Texas for more information about these lines.
One capful of blue dye was poured upstream of the feature by Aqua Texas staff. The dye was non-toxic and poses no environmental threats. After approximately 30 seconds the dye was observed emerging into the pool on the downstream side of the dam. The dye emerged from two locations on the downstream side of the dam: approximately 70-80 feet, and 95-98 feet as measured from the west buttress of the dam. The collapse feature was 70 feet from the west buttress of the dam on the upstream side.
From these observations, we infer that the water flowing into the collapse feature is emerging downstream of the dam and is unlikely to be recharging the Trinity Aquifer. Rather, the collapse feature is likely the result of structural damage (undermining of the dam) in the base of the dam which is now allowing water from Cypress Creek to flow underneath it rather than pooling behind it.
As of July 13th, the collapse feature appears to have increased in diameter by approximately 2 feet.
Update from County Staff: Staff with diving gear and a camera found that “just downstream of the 4-foot diameter hole at the bottom of the creek on the upstream side of the dam, is a very large cavern approximately 20 feet wide.  The cavern averages about one foot tall but is not uniform.  The underside of the dam is uneven boulders and concrete.  …It extended back under the dam at least 10 feet.  The cavern is right where the dye came through the dam on the test [mentioned above].  It starts about 10 feet from the east bank and ends about 30 feet from the east bank. …If someone were to get sucked down into the upstream side, they wouldn’t make it through the dam.”

Left: Blue dye is poured into feature upstream of concrete dam. Right: Dye emerges on downstream side of dam.

It is not currently advised to swim, recreate, or otherwise have contact with the water in this area due to potential structure instability and temporary water quality issues.
Firstly, there are issues with people swimming in or near the collapse feature as well as near the dam, which may not be structurally sound. County Officials are working with the owner of the structure who has temporarily restricted access to the hole and has temporarily filled with some gravel/concrete.
Please contact Ray Helm, Precinct Constable 3, for additional information about safety concerns: ray.helm@co.hays.tx.us (512) 847-5532. The City of Woodcreek may also have additional information regarding safety.

Because flow conditions are altered upstream and downstream of the dam, low flows and ponding could increase bacteria levels. A previous document noted that water samples were collected on July 6th and sent to GBRA for analysis, but a mistake was made and samples were not analyzed at the lab. Samples collected upstream and downstream of the dam on Thursday July 13th show that bacteria levels were not exceeding state standards. Results will be posted on the Cypress Creek Watershed Protection Plan Website (cypresscreekwatershed.org). Additional sampling will continue as often as time and funding allows.
If dam structure is an issue, wastewater lines could be compromised in the future and could result in direct leakage of sewage to the creek. It is understood that these lines transport raw, untreated sewage across the creek, although that has not been confirmed. Even treated effluent discharges into the creek could cause significant water quality degradation and trigger regulatory intervention. At this point bacteria levels do not indicate the presence of any sewage leaks and Aqua Texas Staff are monitoring the issue. Texas Parks and Wildlife Kills and Spills team is aware of the situation and ready to assist, should a spill or leak occur.

The dam is privately owned and the owner is working with the County to determine the best path forward, which could include repair or removal. No dam maintenance records have been listed with any state agency and Meadows Center Staff will assist the City, County and others in searching for relevant information and records.
The dam is not registered with TCEQ and TCEQ staff has stated that they have no jurisdiction over the structure. GBRA staff also has indicated that they do not have responsibility or jurisdiction to repair the dam. There are no other regulatory agencies with jurisdiction known as of this time.
From the County: “Repair of the dam would involve rerouting the water around the area to be repaired, and if it’s possible, the lake below the dam should be lowered to dry out the work area so the extent of the damage can be assessed.  A Sand and Gravel permit from Texas Parks and Wildlife would be required, along with a floodplain permit from the City of Woodcreek.  The damage to the dam appears to be in their jurisdiction.  A flood hazard area permit from our department would also be required if work had to be done on the west half of the creek.”
From TPWD: “Most of the Cypress Creek channel between Jacob’s Well and the confluence with the Blanco River is state-owned, and the creek is considered navigable, the state has an interest in activity involving the channel. Typically, a sand & gravel permit from TPWD and an easement from the General Land Office would be required for disturbance within the channel or for disturbing or removing sedimentary material within the channel, including for repair or placement of structures within the channel.”
Contacts Alerted to Situation
City of Woodcreek – Brenton Lewis, City Manager– 512.847.9390
City of Woodcreek – Lina Land, Assistant Administrator – 512.847.9390
GBRA – Lee Gudgell, Water Quality Technician – 830.379.5822
TCEQ – Nicole Pearsall, TCEQ Watershed Protection Plan Project Manager – 512.239.6609
TCEQ – Joe Strauss, Dam Safety Program – 512.239.4988
TPWD – Travis Tidwell, Kills & Spills – 512.389.8612
Aqua Texas – Bob Laughman, President – 512.990.4400 ext. 54105
Aqua Texas – Brain Robinson – RBRobinson@aquaamerica.com
Meadows Center – Meredith Miller, Senior Program Coordinator – 512.213.8793
Meadows Center – Claudia Campos, Watershed Planning Specialist – cdc114@txstate.edu
Meadows Center – Doug Wierman, Hydrogeologist – 512.826.2729
Meadows Center – Michael Jones, Water Resource Specialist – 830.312.8131-mj1226@txstate.edu
WVWA – David Baker, Executive Director – 512.722.3390
POA – Nancy Russell, President – 281.798.5031
HTGCD – Jeff Watson, District Hydrogeologist – 512.858.9253
Hays County – Tom Pope, Floodplain Administrator – 512.393.2150
Hays County – Ray Helm, Constable Precinct 3 – 512-847-5532 or helm@co.hays.tx.us