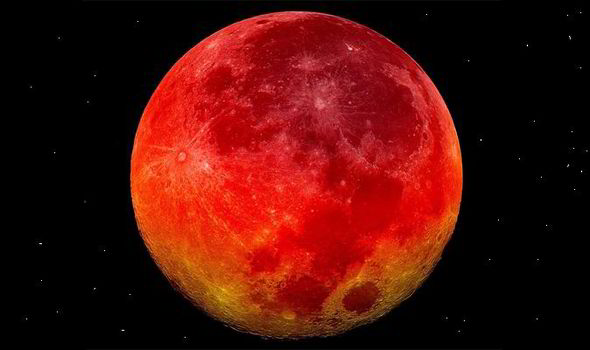 By Wayne Gosnell: My friend Sandy and I get great pleasure out of being the first to text the other whenever we first glimpse a Comanche Moon.  That’s when the full moon rises out of the eastern horizon just after sunset, catching the rays of the setting sun, which paint it a deep orange. It is said the Comanche warriors of old liked to make their raids into Texas and Mexico by the light of this full moon—the Comanche Moon.
The next Comanche Moon will rise this Sunday night, September 27, and it will be a very special one. It will also be a “Super Moon,” meaning that it will be at its perigee or the closest it comes to us in its elliptical orbit around the Earth. The moon will appear to be 12 to 14 percent larger and 30 percent brighter than when it is at its apogee or the farthest it gets from the Earth.
But what makes the moon this Sunday night really special is that it will eclipse! The eclipse will start just before moonrise at 7:15 pm. By about 9:15 pm the moon will disappear entirely, blocked from the sun’s rays by the Earth, and will be entirely in its shadow. The moon will remain fully eclipsed until about 10:20 pm, when it will begin to slowly reemerge. Just after midnight, when it is high in the nighttime sky, it will once again be a full moon.
Thanks to the Hill Country’s relatively light-pollution-free night skies, we should have a great view of the eclipse if the weather cooperates. Given the early hour and the warm temperatures, it will be a good time to get the young ones outdoors to see this extraordinary astronomical event. Having a good set of binoculars will make it all the more enjoyable.
Some people say it will be a “Blood Moon” because, once it is totally eclipsed, it may appear almost red in color, a phenomenon caused by sunlight passing through the Earth’s atmosphere onto the surface of the moon during totality.
There are people out there who are convinced the Blood Moon on Sunday will be accompanied by an apocalyptic meteor strike that will signal the end of the world. I think that’s crazy. There’s nothing to fear; it’s just a Comanche Moon, and the Comanches no longer raid into Texas. But an eclipsing Comanche Moon? And a Super Moon at that? Now that’s pretty special. In fact, it won’t happen again until the year 2033!
And if there is an apocalyptic meteor shower along with it, then that will be quite a sight as well. I’ll certainly need to text that to Sandy. Enjoy!
Learn more about protecting starry skies in the Texas Hill Country and the Hill Country Alliance (HCA) Night Sky program at www.hillcountrynightskies.org
Wayne Gosnell is a volunteer leader on the HCA Night Sky Team. The Hill Country Alliance is a nonprofit organization whose purpose is to raise public awareness and build community support around the need to preserve the natural resources and heritage of the Central Texas Hill Country.