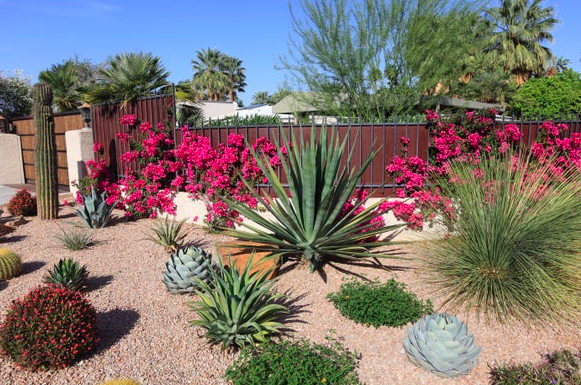 Yards in Austin, Tex., look like most across the country: sprawling expanses of short, uniform grass. But when intense Texas droughts set in, dead brown patches deface the Kelly green monochrome. Instead of repeatedly replanting these patches with the typical sod, the homeowner association of one Austin neighborhood, Travis Country, offers another option: filling in the brown spots with less-thirsty native species. As Cynthia Wilcox, the association’s grounds committee chair, puts it: “When your grass gets big dead spots, stop fighting it.” About 750 homeowners—half of the subdivision—have taken this advice. Roughly 500 of those homes have gone even further, landscaping much of their property with drought-tolerant native species such as long-bladed buffalo grass, slender salvia stalks and mountain laurel trees, which drip with purple blossoms that some people think smell like grape soda.
With homeowner associations often focused on projecting a uniform, ideal suburban image, it is rare for one to suggest—let alone allow—such a landscape shift. But precisely because these groups (usually called HOAs) establish and enforce aesthetic rules for millions of American yards, they could be a way to spread sustainable practices promoted by conservationists—while also helping subdivisions tackle problems ranging from unsightly lawn splotches to polluting fertilizer runoff. Some conservation programs are testing ways to overcome sociological and economic hurdles to get HOAs to embrace such changes, or at least not oppose them.
Residential lawns in the U.S. suck up a lot of water. EPA data show that, on average, 15 percent of residential water use involves lawns—which cover three times more land than crops irrigated for agriculture, according to NOAA and NASA research. Furthermore, grass fertilizer can run offinto nearby streams, ponds or other water bodies, sometimes fueling algae blooms. And using homogenous flora such as commercial lawn grass species across many geographic zones dilutes local biodiversity; the practice has been linked to at least one native species decline, as introduced plants replace the native vegetation to which local wildlife has long adapted.
Conservationists have argued that some of these problems could be avoided if people made more diverse landscaping choices that support native species. In arid parts of the West, for example, landscaping a yard with local, drought-tolerant species and opting for mulch over grass can cut household water use by 30 percent. Native turfgrasses (which can replace typical lawn grass species) sprout fewer weeds and grow more slowly, reducing the need for mowing and its associated carbon emissions. Susannah Lerman, an ecologist with the U.S. Forest Service, also foundthat lawns mowed less frequently supported more bees.
Read more from Leslie Nemo with Scientific American here.