Could groundwater pumping cause the ground to sink? It’s possible, scientists say 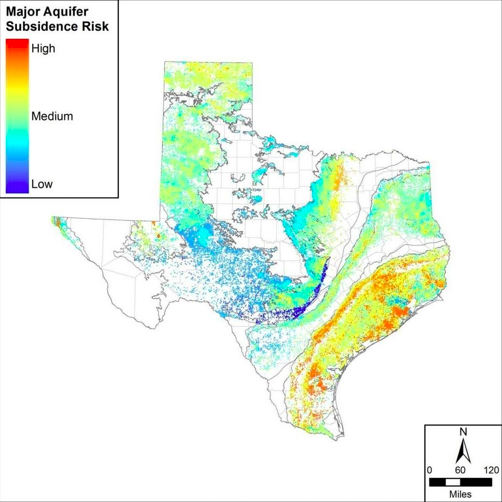 For the last several years, scientists have warned of the sinking ground beneath cities along the Gulf Coast.
Known as subsidence, it’s a strange phenomenon that gradually deflates the surface of the ground as groundwater is pumped from beneath. The threat has been mostly noted in cities along the coast, where underground soils are largely composed of a sandy clay. Central Texas lies 130 miles from the coast, but that doesn’t mean parts of it — Bastrop and Lee counties in particular — are free from the threat of subsidence.
Last week, consultants hired by the Texas Water Development Board presented to the Lost Pines Groundwater Conservation District an overview of how subsidence is projected to affect southeast Central Texas as Bastrop and Lee counties become an increasingly popular source for groundwater supply.
Denver-based LRE Water, the hydrogeology firm hired by the state, conducted a macro-analysis of each major and minor aquifer in the state.
Of the state’s nine major aquifers, five were found to have high risks: the Gulf Coast Aquifer, West Texas’ Pecos Valley Aquifer, the panhandle’s Ogallala Aquifer, El Paso’s Hueco-Mesilla Bolsons Aquifer, and the Carrizo-Wilcox Aquifer, which runs from northeast Texas through Bastrop and Lee counties and into the Mexican border.
Read more from Brandon Mulder with The Statesman here.

The calculated subsidence risk mapped at each of the wells evaluated within the nine major aquifers. [Texas Water Development Board]