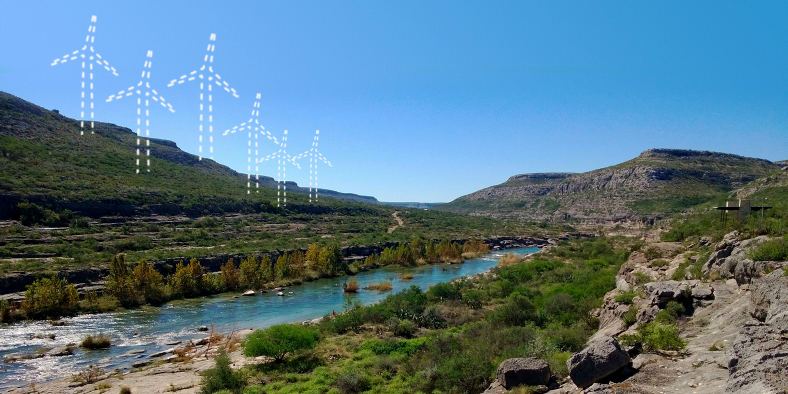 The Devils River Conservancy, is spearheading the “Don’t Blow It” campaign to advocate for thoughtful regulation of wind energy development — an industry quickly expanding in rural Texas, largely without rules and with serious negative implications for Texans. While the campaign is in full support of renewable energy solutions, “Don’t Blow It” by placing renewable energy in locations that negatively impact ecologically and culturally sensitive and pristine areas, military operations and border security, as well as the communities that depend on these assets.

The statewide initiative illustrates the environmental, economic and cultural implications wind farms pose in Val Verde County and demonstrates the need for development by design to protect what is left of “Wild Texas”.

Val Verde County lies at the crossroads of three distinct ecological regions: the Chihuahuan Desert, the Tamaulipan Brushlands and the Edwards Plateau. It is home to many historical and natural treasures including its clear springs, vast unadulterated vistas and the last wild and pristine river in Texas, the Devils River. More than 1 million tourists visit Val Verde County state and federal parks each year, seeking a retreat from the urban jungle.

Recently, Val Verde County has come under threat, attracting the attention of foreign industrialists who have acquired over 140,000 acres of undeveloped ranch land with the intention of expanding wind farms. Such development in this region will forever scar the iconic terrains, threaten the value of ecotourism, encroach upon military training grounds, degrade private property values and decimate one of the last vestiges of our “Wild Texas” heritage.
Read more from the Devils River Conservancy on TribTalk: A Publication of the Texas Tribune, here.