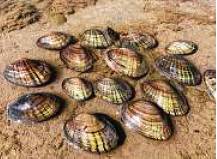 The U.S. Fish and Wildlife Service has proposed placing six Texas freshwater mussels on the endangered species list and designating nearly 2,000 miles of Texas rivers as critical habitat for them.

The Guadalupe River Basin — one of four river basins highlighted by the proposal — is home to three of the mussels: the Guadalupe fatmucket, the false spike and the Guadalupe orb.

As bottom feeders, freshwater mussels are vital to the Texas Hill Country’s ecology and food chain.