State of the Hill Country: Growth in unincorporated areas of Kendall County

As the new State of the Hill Country Report illustrates, the Hill Country population has increased by 50% since 1990, with most of this growth occurring along the I-35 corridor. The fastest growing counties are Hays County with 195% growth, and both Comal and Kendall Counties with 176% growth. These are three of the five fastest growing counties in the entire United States.

In Kendall County, the City of Boerne has enacted an award-winning Unified Development Code to address the negative impacts of development on the natural environment. As an incorporated area, the city has the authority to implement low impact development solutions that address stormwater pollution, preserve the night sky, ensure parkland dedication, protect heritage trees, and safeguard groundwater recharge features.

By comparison, the State of Texas prevents counties, including Kendall County, from having adequate authority to safeguard natural resources and ensure the well-being of its citizens. While all other states provide counties appropriate tools for managing growth, Texas counties are the “wild west,” where “foxes rule the hen house.”

Our county is experiencing the negative impacts of unfettered growth permitted by the State under the guise of “private property rights.” These include the right to foul your neighbor’s air and water, while exploiting existing infrastructure without paying for the impacts of new development. 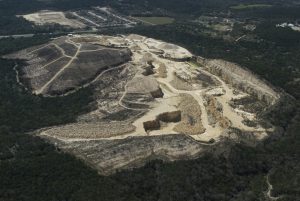 This aerial photograph shows a dramatic view of a massive gravel mine rising out of the woods next to a neighborhood and natural scenery – like a tan-colored scar on the land. (Photo taken by Katherine Romans)

Let’s take air quality as an example. According to State law and the Texas Commission on Environmental Quality (TCEQ), rock crushing and concrete batch plants can be situated next to housing developments, hospitals and schools. These industrial operations produce silica dust, which pollutes the air and is associated with lung disease and lung cancer.

One of these rock crusher plants was aggressively opposed by the local community over concerns about the negative health impacts it would cause. Despite these well-founded concerns it was granted approval by the TCEQ even though it is situated next to my daughter’s school. This location will provide her classroom with a front-row seat of the State’s negligence.

The Edwards Aquifer Recharge Zone is also threatened by rampant development. While well- spacing requirements can mitigate high-density development throughout most of the county, water piped in from Canyon Lake Reservoir facilitates unmitigated sprawl over the recharge zone. The resulting layer of roofs, roads and other impervious cover can reduce aquifer recharge while increasing pollution loads from lawn chemicals, oil slicks and heavy metals carried by stormwater into the aquifer.

The State of Texas has turned a blind eye to the negative impacts of development on the recharge zone and doesn’t provide legal authority to groundwater conservation districts to prevent pollution from fouling aquifers or prevent recharge features from being destroyed. Bizarrely, the State doesn’t fully recognize the connection between surface water and groundwater, despite ample scientific evidence and the simple logic that they are intrinsically connected.

As development spreads throughout Kendall County, demand on our region’s limited groundwater supply is increasing. This increased groundwater use might be sustainable during years with normal rainfall; however a severe drought could easily leave many water well owners high and dry. Our local groundwater district is attuned to this concern and seeking to address local concerns through its limited authority. However, there may come a point where legal options are exhausted, and we can only hope the state will take sensible action to help our county avert a calamity.

Rows and rows of houses, piled next to each other are shown in this Google Earth view of growth between Boerne and San Antonio – 03-16-2022

To help Kendall County deal with increasing traffic, the Texas Department of Transportation (TXDOT) proposed a state funded loop road around Boerne in 2018, known as the “Kendall Gateway.” However, the proposed loop road was rejected by local citizens who viewed it as an abusive use of eminent domain and an outsized solution for addressing local concerns that the loop would simply encourage more growth.

The State’s proposal to use eminent domain to solve traffic problems created by unmitigated development in unincorporated areas was a slap in the face to county citizens. They view it as inherently hypocritical for the state to claim to prioritize private property rights by denying counties local authority while also proposing the use of eminent domain to solve traffic issues created by unbridled development aided by the State.

In truth, the negative impacts of development can be mitigated, and transportation solutions better implemented if Kendall and other counties are granted adequate and reasonable authority to contend with these challenges. To date, our Legislature seems to care very little about the concerns of county residents and has been more inclined to support the interests of industries that exploit the vulnerability of Kendall County and its neighboring communities.

Our hope is that the State of the Hill Country Report will inspire State leaders to acknowledge the profound threats to communities in the Texas Hill Country and to take action to ensure the well-being of Hill Country citizens.