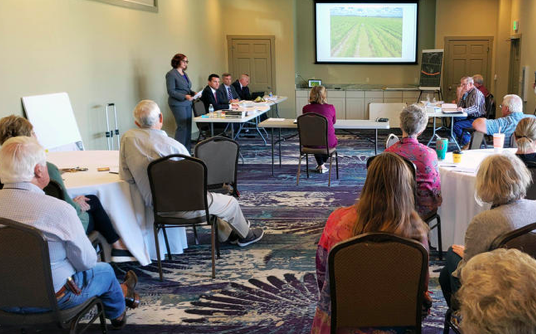 Kay Pence owns a ranch in the Hill Country town of Fredericksburg. About a year ago, she got a call from the pipeline company Kinder Morgan. The caller told her the company planned to run a section of its 430-mile Permian Highway natural gas pipeline through her property. Pence didn’t like that.
“This is going to sound overreactive, but you felt violated,” Pence says. “They have access to your property, and there was nothing you could do.”
In Texas, pipeline companies have the power of eminent domain. That means they can take private land even if the landowner doesn’t want to sell. The company only needs to pay a fair price. Companies say this allows them to build the infrastructure necessary to move oil and gas.
But a fair price can be hard to settle on.
“You have property in the Hill Country that is fifth generation and their property is being cut in half,” Pence says. “Their property is ruined.”
Now, as building starts on the pipeline, some landowners are rejecting Kinder Morgan’s offers and winning awards vastly greater through a legal process called a condemnation hearing. It’s a unique proceeding where three local volunteers appointed by a district judge hear arguments about the land’s value and make a decision.
In Pence’s case, an offer of $45,000 for a 3-acre strip of land turned into an award of $1.2 million after the hearing. In Blanco County, a landowner who was told by Kinder Morgan that his land was worth $20,000 was awarded $1.3 million. Another landowner in Gillespie County turned an offer of $85,000 into an $11 million award.
Kinder Morgan has appealed some of the awards. But pipeline opponents are pointing to the results of these hearings as evidence the company is undervaluing Hill Country land.
Some also see this as proof the company is messing with the wrong small towns.
Read more from Mose Buchele with KUT 90.5 here.