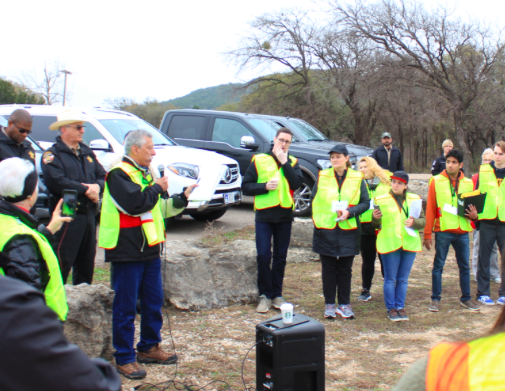 Last month, the Lubbock Avalanche Journal reported that though wildfire season typically begins in March, West Texas is seeing wildfires even earlier in the year. As a result, lots of communities have a plan of action for wildfires. But how many Texas communities perform a dry run before an emergency actually happens? So far, only one, the Comanche Trail neighborhood near Lake Travis, has done such a drill.
“I’m on the top of a hill, so I worry about a fire starting at the bottom,” says Tom Hollingshead, who was getting ready for Comanche Trail’s drill last Saturday. It was a cold, wet day but Hollingshead and others had fire on their minds.
Comanche Trail is tucked in a hillside along scenic Lake Travis in the Texas Hill Country. It’s surrounded by vegetation like cedar trees, which become flammable during dry spells. The neighborhood is also close to a couple of popular lakeside parks where the risk for recreational fires going wrong is high. But residents are concerned about something else: how to evacuate if a wildfire starts.
Read more from Jill Ament with Texas Standard here.