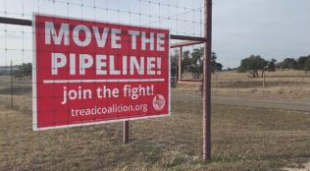 “This is Texas, by God. I am fifth generation Texan and I am not going to roll over for a multi-billion dollar company,” says Kay Pence.
She has been fighting Kinder Morgan for more than a year now.
The company offered her $45,000 to run part of the Permian Highway Pipeline through her property.
“Our appraisal is based on what we’ll actually be physically touching,” explains Allen Fore, Kinder Morgan vice president of public affairs.
Pence and many other landowners disagree.
“We all contest that the whole property is being damaged by that because there’s a 42-inch high pressure pipeline running through the property,” Pence says.
Pence put her house on the market months before the pipeline route was announced.
She says once potential buyers started finding out that the pipeline would cut through her property, they starting walking away.
“Buy my property, put your pipe in and then sell my property. And if it truly sells for what you purchased it for, then you can prove that pipes do not impact the value of the property,” Pence says.
At her condemnation hearing in October, commissioners sided with Pence, awarding her $1.2 million.
“I’m not saying I’m against oil and gas. I am pro-energy, it has made us a successful state but at the expense of landowners and landowners not having a voice,” Pence says.
Pence says there’s a way for companies and neighbors to work together, but calls Kinder Morgan ‘a bad actor.’
“That’s not the way all oil and gas companies in Texas behave. Kinder Morgan’s just one of the biggest and they can push the hardest but they’re not going to take my land without me fighting for it because this is not right,” Pence says.
Read more from Tahera Rahman with KXAN here.