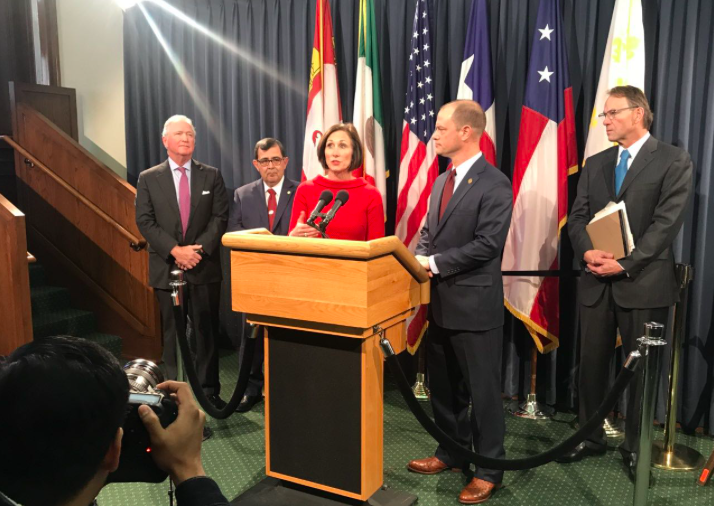 AUSTIN – At a press conference at the Texas Capitol, State Senator Lois Kolkhorst (R-Brenham) and State Representative John Cyrier (R-Lockhart) today announced that they have filed companion legislation (SB 526 and HB 1214) to constitutionally dedicate revenue from the Sporting Good Sales Tax (SGST) to fund the Texas Parks and Wildlife Department.
“As our state population grows, we must promote and protect our public parks and state historic sites. We can all agree that these special places are vital to our economy and to our Texas heritage, culture, and way of life,” said Senator Kolkhorst. “A reliable source of funding for state parks and historic sites is an investment in our future and a gateway to the outdoors for every Texan. This funding will allow maintenance, repairs and improvements to happen on a regular basis. Texans should not have to wait for days, weeks or months to gain entrance to these locations which are true Texas treasures.”
“The state park system that exists today was not built with the anticipation that 10 million visitors per year would utilize the parks,” said Representative Cyrier. “We have an obligation to ensure that future generations have access to these important outdoor spaces. The 86th Texas Legislature has an historic opportunity to make a lasting impact on our parks, creating stability for future planning and growth that will benefit all Texans.”
In the past, parks were funded primarily through a one-penny-per-pack tax on cigarettes. In 1993, during the 73rd Legislative Session, lawmakers replaced the cigarette tax funding with a portion of revenues derived from the sales tax on sporting goods. The SGST was designed to create a steady stream of funding for our state and local parks. However, from 1993 to 2017, the state has collected nearly $2.5 billion in revenues from the SGST, yet only 40 percent has been appropriated for parks.
Former chair of the Texas Parks and Wildlife Commission, Joseph Fitzsimons has spearheaded the Texas
Coalition for State Parks, a group of former commissioners and outdoor advocates focused on pursuing a
constitutional dedication of SGST revenues. “Our state and local parks play a vital role in providing outdoor experiences to an increasingly urban state,” said Fitzsimons. “Our park system is aging, infrastructure is outdated and chronic underfunding has placed a strain on our system. A constitutional dedication of the Sporting Goods Sales Tax will meet current and future demands, and ensure all Texans can enjoy the great outdoors.”
The Texas Constitution provides that the legislature, by a two-thirds vote of all members of each house, may propose amendments revising the constitution and that proposed amendments must then be submitted for approval to the qualified voters of the state.
In 2014, the Texas State Park Advisory Committee recommended that a constitutional amendment permanently guaranteeing revenues generated from the Sporting Goods Sales Tax be dedicated to supporting state and local parks. In a public opinion survey, 70 percent of voters would support a constitutional amendment to permanently dedicate sales tax revenue for state parks.
Senate Joint Resolution (SJR) 24 is co-sponsored by: Senators Dawn Buckingham (R-Lakeway), Donna Campbell (R-New Braunfels), Pete Flores (R-Pleasanton), Juan “Chuy” Hinojosa (D-McAllen), Joan Huffman (R-Houston), Bryan Hughes (R-Mineola), José Menendez (D-San Antonio), Robert Nichols (R-Jacksonville), Charles Perry (R-Lubbock), José Rodriguez (D-El Paso) and Judith Zaffirini (D-Laredo).
Contact: Jenifer Sarver       512-577-9099      Jenifer@SarverStrategies.com