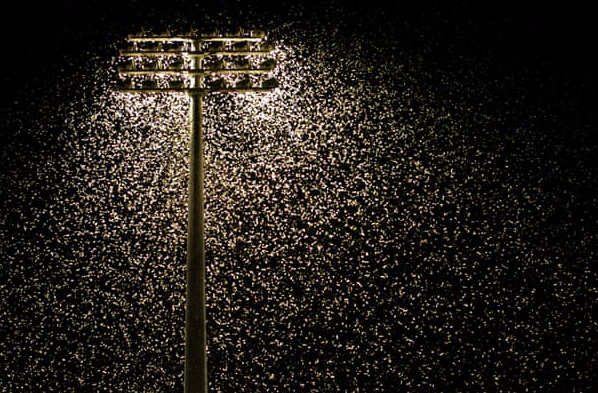 Light pollution is a significant but overlooked driver of the rapid decline of insect populations, according to the most comprehensive review of the scientific evidence to date.
Artificial light at night can affect every aspect of insects’ lives, the researchers said, from luring moths to their deaths around bulbs, to spotlighting insect prey for rats and toads, to obscuring the mating signals of fireflies.
“We strongly believe artificial light at night – in combination with habitat loss, chemical pollution, invasive species, and climate change – is driving insect declines,” the scientists concluded after assessing more than 150 studies. “We posit here that artificial light at night is another important – but often overlooked – bringer of the insect apocalypse.”
However, unlike other drivers of decline, light pollution was relatively easy to prevent, the team said, by switching off unnecessary lights and using proper shades. “Doing so could greatly reduce insect losses immediately,” they said.
Brett Seymoure, a behavioural ecologist at Washington University in St Louis and senior author of the review, said: “Artificial light at night is human-caused lighting – ranging from streetlights to gas flares from oil extraction. It can affect insects in pretty much every imaginable part of their lives.”
Insect population collapses have been reported in Germany and Puerto Rico, and the first global scientific review, published in February, said widespread declines threatened to cause a “catastrophic collapse of nature’s ecosystems”.
The latest review says: “Insects around the world are rapidly declining. Their absence would have devastating consequences for life on this planet.”
There are thought to be millions of insect species, most still unknown to science, and about half are nocturnal. Those active in the day may also be disturbed by light at night when they are at rest.
The analysis, published in the journal Biological Conservation, notes that light has long been used deliberately by farmers to suppress insects. But as human infrastructure has expanded, and the cost of lighting has fallen, light pollution has come to affect a quarter of the world’s land surface.
Read more from The Guardian here.