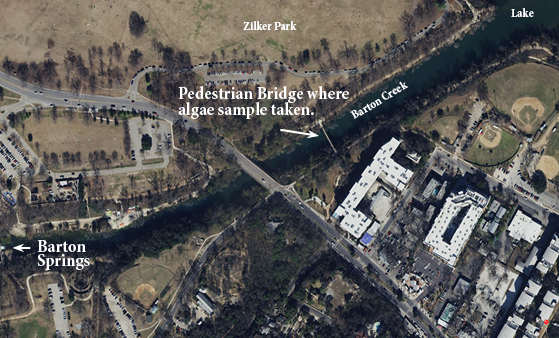 Additional testing has revealed increasing levels of neurotoxins in algae at a greater number of locations. Samples were taken on Monday, August 12, 2019, at Auditorium Shores, at Red Bud Isle and at Barton Creek. Samples at Barton Creek were taken just below the pedestrian bridge over Barton Creek on the Ann and Roy Butler Hike and Bike Trail. All the samples contained greater amounts of neurotoxins than found the previous week.
Red Bud Isle remains closed. The public should not allow their dogs to swim anywhere in Lady Bird Lake. In addition, they should keep their dogs out of Barton Creek where algae is present.
In addition to swimming, dogs should not be allowed to drink the water in these locations. People should avoid handling the algae and minimize their exposure to the water. Boating and paddle-boarding is still allowed at your own risk. Pets and people who come into contact with the water should rinse off. If symptoms develop, they should seek immediate medical attention.
“Barking Springs” at the spillway of Barton Springs Pool is upstream of this area. Water at Barking Springs is cold and flows from Barton Springs and Barton Creek. At this time, we believe people and pets can continue to swim in this area at their own risk. They should avoid going downstream to areas with floating algae. They should be aware that bacteria is always a concern in smaller waterways where there is a high concentration of dogs.
Previously, algae in Barton Creek downstream of Barton Springs appeared to be a mix of harmless green algae. However, the most recent samples showed a low presence of blue green algae in the Barton Creek area of Lady Bird Lake. These samples did test positive for neurotoxins. This is a reminder that the situation is evolving and can change rapidly.
Watershed Protection will be taking more samples for testing tomorrow.
The algae will naturally die off when cooler weather returns in the fall. At this time, the City of Austin has not identified a safe and effective way to treat or remove the algae, and it is likely that Red Bud Isle will remain closed for the next several weeks.
On Sunday, August 4, the City of Austin warned residents not to allow their pets to swim in or drink from Lady Bird Lake after being told that a dog had died from possible exposure to harmful algae. Since then, the City has been told about three other dogs who have died after swimming in the lake.
On Monday, August 5, the City was able to confirm the presence of algae that could produce a neurotoxin.
Drinking water remains unaffected by this situation. Austin Water regularly looks at algae levels on Lake Austin and Lake Travis and has not seen levels of concern for drinking water. Austin Water does not currently use Lady Bird Lake as a source for drinking water.
Read more from the City of Austin here.