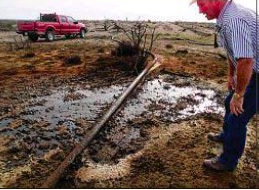 So-called “orphan” oil and gas wells, which have been abandoned by defunct companies that cannot pay to plug them, are a growing problem in many states thanks to a recent slump in energy prices that has forced marginal operators out of business.

Nobody knows how many orphan and abandoned drilling sites litter farms, forests and backyards nationwide. The U.S. Environmental Protection Agency estimates there are more than a million of them. Unplugged wells can leak methane, an explosive gas, into neighborhoods and leach toxins into groundwater….Read more from Austin American-Statesman