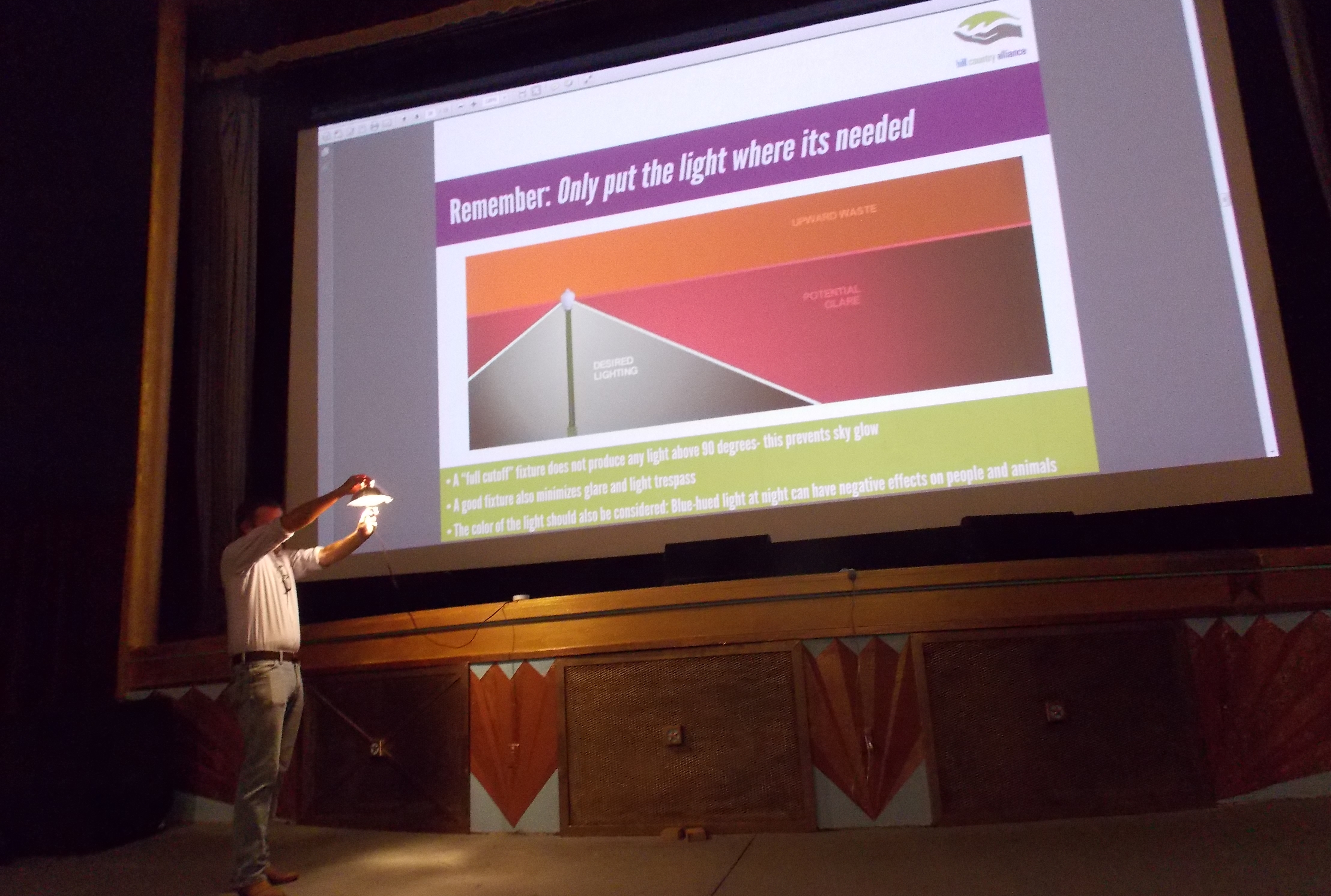 Although light from Austin and other nearby cities is starting to threaten the nighttime darkness of the areas surrounding Llano and the rest of the Texas Hill Country, it is not too late to reverse the trend and protect the views of the heavens.
That was the message from Matt Lara of the Hill Country Alliance, whose “Better Lights for Starry Nights” Dark Sky Program sought to address the importance of dark skies and ways to protect against light pollution, such as fixing wasteful outdoor lighting and safely, effectively and cost-efficiently lighting homes and businesses .
About 25 people attended the workshop. Lara told them the concepts he was sharing are “simple, common sense solutions” to the growing problem of light pollution and noted more light isn’t always better light.
“It’s a misconception that more light is better,” Lara said. “Poorly directed light can be much less safe than not enough light. Shadows can be darker when the light is shining in your eyes.”
Lara said that dark, starry night skies “resonate” with people and that people often have “a very powerful reaction” to seeing such features as the Milky Way galaxy itself.
He noted that the encroaching lights from Austin, Johnson City and Mason to his Spicewood home can interrupt the feeding, breeding, sleep and migratory patterns of wildlife, but can also interrupt the sleep patterns and health of humans.
“It’s awfully hard to sleep at night when someone leaves the lights on,” he said, noting the color of the light can make a difference as well, as blue light such as that emitted from cell phones, can block the production of melatonin, a hormone crucial to sleep.
As for the fundamentals of light pollution – among them, urban sky glow, glare, light trespass and clutter – the solution is often as simple as directing the light a different way or directing the light where it needs to go with a shielding fixture.
“A lot of this is about being a good neighbor,” Lara said, demonstrating the difference a shielded fixture can make.
Enchanted Rock State Natural Area earned in February the International Dark-Sky Association’s (IDA) Dark Sky designation.
Ranger Doug Cochran said he and his associates hope the area – a rough triangle bordered by Llano, Fredericksburg and Mason – becomes the nation’s first Dark Sky Region. All three cities have resolutions in favor of protecting the night skies and Llano is working on a lighting ordinance, he noted.
At the park itself, where visitors can view the Milky Way Galaxy on clear nights, Cochran said he and his fellow rangers did something very simple.
“We looked at what we were doing and asked ourselves, ‘Do we need it?’” he said. “If we did, we put a shield on it and protected out skies.”
He and Llano Main Street Director Terry “Tex” Toler are working together to make the designation a reality. Toler said the initiative would be entirely voluntary and would bring families to Llano who might otherwise travel to Big Bend National Park to see a clear view of the heavens.
“I can’t imagine growing up and not being able to see the stars,” Toler said.
Log onto www.hillcountrynightskies.org for more information.