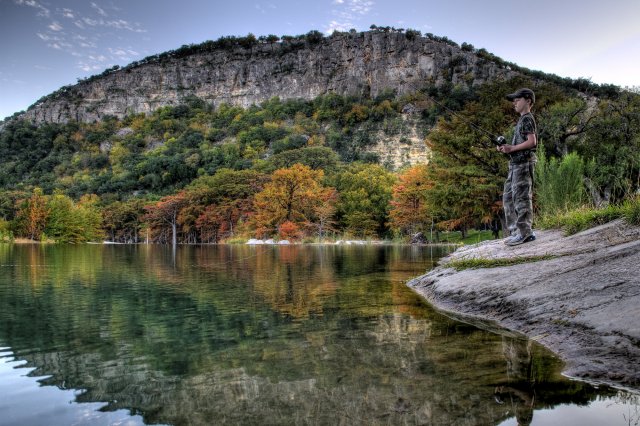 With fish and wildlife populations under decline throughout the country, Hill Country Texans are hailing a new opportunity to reverse this trend.  The Recovering America’s Wildlife Act, H.R. 4647 in the U.S. House of Representatives, would provide $1.3 billion annually from existing federal revenues for state-led projects to improve and restore fish and wildlife habitats, without any increase in taxes. This federal legislation represents a once-in-a-generation opportunity to provide crucial conservation funding, increase regulatory certainty for business and industries, support the nation’s burgeoning outdoor recreation industry, and change the course of history for thousands of at-risk fish and wildlife species.
Texas’ fish and wildlife species are facing unprecedented challenges from habitat loss, invasive species, disease, pollution, and extreme weather events. In the Hill Country, such iconic species include the Texas blind salamander, Golden-cheeked warbler, and Guadalupe bass. Experts have identified 1,310 Species of Greatest Conservation Need in Texas requiring action to prevent them from slipping closer to extinction. Once a species is placed on the federal Endangered Species List, it takes extensive public and private resources for recovery. And the listing poses additional constraints on industry and business.
In the Hill Country region, this legislation could offer tremendous benefits, preventing further declines of a number of popular species.
“Funding from the Recovering America’s Wildlife Act will provide new and expanded opportunities for private lands conservation in the Hill Country,” says wildlife biologist and conservation project manager Romey Swanson of the Hill Country Conservancy. “It could fund private land incentives, including voluntary conservation easements, opportunities to help balance development with protecting natural ecosystems. These protections are essential to the recovery of a variety of species, but perhaps none speaks better to the challenges facing the Hill Country than the salamanders in our springs, found nowhere else in the world. These imperiled animals rely on abundant clean water recharging the aquifers, springs, and streams that are the life blood of the Hill Country.”
Daniel Oppenheimer, land program manager with the Hill Country Alliance agrees.  “Funding resulting from passage of H.R. 4647 would help organizations and landowners working across the Hill Country towards shared stewardship goals. Good land stewardship benefits not only fish and wildlife; it also provides clean and abundant water resources, mitigates flooding, and supports our agricultural and tourism sectors.”
U.S. Representatives Jeff Fortenberry (R-NE) and Debbie Dingell (D-MI) introduced the bipartisan legislation with nationwide support from conservationists, hunters, anglers, businesspeople, oil and gas company representatives, and the outdoor recreation industry. Texas will be eligible for more than $63 million per year. Enthusiasm is growing nationwide; currently the bill has 81 cosponsors, including 7 Members of Congress from Texas.
Passage of H.R. 4647 would direct a portion of existing royalties from energy and mineral production on federal lands and waters to the Wildlife Conservation and Restoration Program, established in 2000. State wildlife agencies would distribute the money to projects for habitat restoration, scientific research, land protection, establishing conservation easements, and other initiatives listed in each state’s Wildlife Action Plan.
According to Annalisa Peace, executive director of the Greater Edwards Aquifer Alliance, “Funding generated by H.R. 4647 would also help spur investment from private sources and local governments to preserve land in the rapidly urbanizing portions of the Texas Hill Country along the IH 35 corridor.”
The Edwards Plateau is at a crossroads of woodlands, arid grasslands and brushlands, which support abundant wildlife. The Hill Country provides specialized habitats for many plants and animals that exist nowhere else on earth. The aquifers below the region contribute significantly to environmental water flows, water quality, and aquatic habitats from streams throughout the Hill Country, and downstream to the estuaries along the Gulf of Mexico.  Healthy fish and wildlife populations support Texas’ booming outdoor recreation economy, including hunting, angling, wildlife watching, kayaking, and hiking.
The Recovering America’s Wildlife Act would implement the recommendations of the Blue Ribbon Panel on Sustaining America’s Diverse Fish and Wildlife Resources. This panel, comprised of conservation organizations, oil and gas industry leaders, sportsman groups, representative of state and federal agencies, and outdoor recreation retailers, concluded that the provisions of the Recovering America’s Wildlife Act would benefit all Americans.
The Texas Alliance for America’s Fish and Wildlife was formed to give Texans a voice for wildlife. Every citizen can help, by urging their U.S. Representative to co-sponsor H.R. 4647.
————————————————————————————————————————-
Texas Alliance for America’s Fish & Wildlife is a coalition of more than a hundred organizations that represent more than a million Texans dedicated to speaking with one voice in support of wildlife conservation in the state of Texas. The Texas Alliance works cooperatively with the national Alliance for America’s Fish & Wildlife and many other groups to support conservation funding throughout the United States.
You can learn more about the Recovering America’s Wildlife Act and the Texas Alliance for America’s Fish and Wildlife by visiting www.txwildlifealliance.org. Photos for media use can be found here.