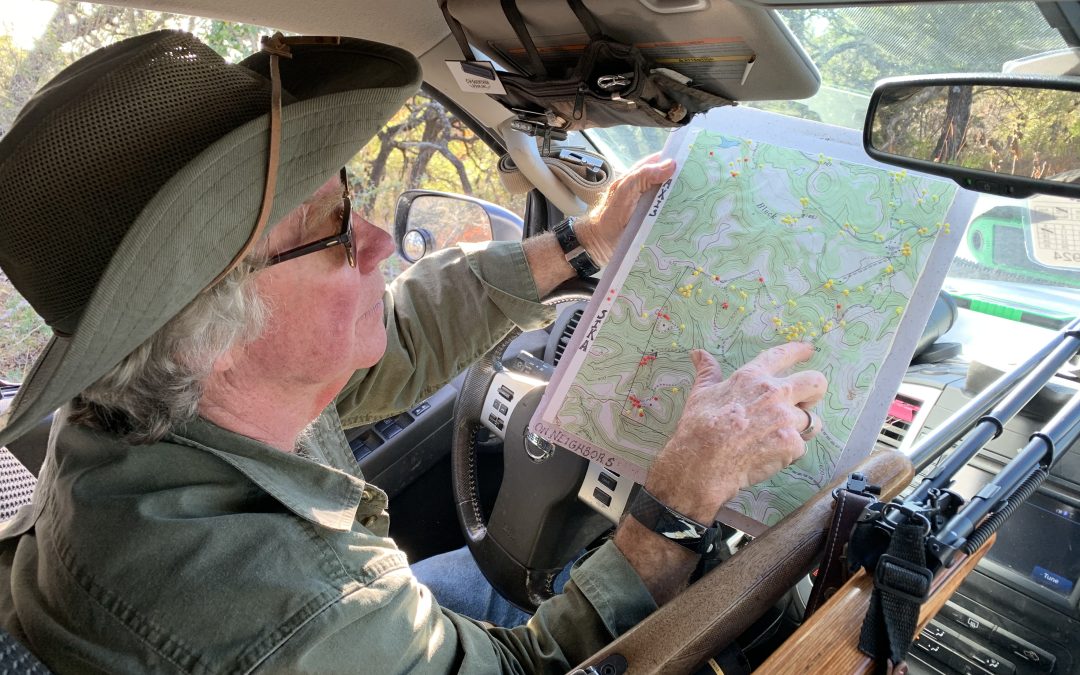 In September, Gillespie County AgriLife Extension and the Hill Country Alliance launched the Axis Deer Control Project, with a goal to raise awareness about the impacts of free-ranging Axis deer, support research that will improve management, and recognize land stewards for their efforts to control this exotic deer.
Axis deer are an exotic species that were introduced from India to the Texas Hill Country in the 1930s. Since their introduction, Axis deer have proliferated, adversely impacting agricultural production, native wildlife, and creek-side habitat in several Hill Country river basins.
In parts of Kimble, Gillespie, Kendall, and Blanco Counties, land managers have documented densities of Axis deer that are now similar to or even higher than native white-tailed deer densities. While some residents welcome the Axis deer, increasing numbers of cattle ranchers, biologists, and landowners are becoming alarmed by the spread of this exotic species.
Matthew Buchholz, a Ph.D. Student at Texas Tech University’s Department of Natural Resources Management, is studying the exotic deer and has documented reports of free-ranging populations of Axis in 34 counties across Central Texas.
Based on field data of life expectancy, fertility, and fawn survival rates, Buchholz estimates that a single Axis doe could raise up to 12 fawns to adulthood. “Each female fawn has the same potential, allowing for the Axis deer population to increase substantially over a short time span,” he notes.
Roy Leslie, a landowner in Kendall County, has seen this rapid growth first hand. Part of the historic Hillingdon Ranch, Leslie has seen the Axis deer compete with native white-tailed deer, the family’s livestock operation, and multi-generational efforts to sustain a healthy ecosystem. His family has a shoot-on-sight policy to control the exotic species.
“My hope is that landowners with high-fences go to all possible lengths, especially with their water-gaps, to ensure their Axis herds do not escape.”
“Some folks might want a couple of Axis deer on their place, but it doesn’t stay that way,” Leslie notes. “Over the past 30 years, we’ve seen an Axis population explosion in our part of the Hill Country.” To date, Leslie and his family have harvested more than 450 free-range Axis and Sika deer on the ranch. Roughly 75% of those have been Axis deer.
To understand the ecology and population dynamics of Axis deer in the Hill Country, Matthew Buchholz is working with landowners like Leslie to collect tissue samples from free-ranging Axis.
Tissue samples will be used to isolate DNA from the individual, which in turn will be used to assess population structure and potential susceptibility to disease. To learn more about Buchholz’s research, contact him at Matthew.Buchholz@ttu.edu or 715-204-8680.
The winners of this year’s prize drawing have all been notified. Thanks to the more than 90 participating hunters as well as to Lochte Feed General Store, Vogel Orchards, Los Cazadores, Boos Quality Deer Processing, Weinheimer and Son, Hohmann General Store, AJ’s Liquor, Sweetbriar Rose, Cave Creek Wildlife Management Association, and the Gillespie County Agricultural Committee for donating prizes.
To learn more about HCA’s axis deer control efforts, click here.
For more HCA press releases, click here.