Removing the mystery of groundwater 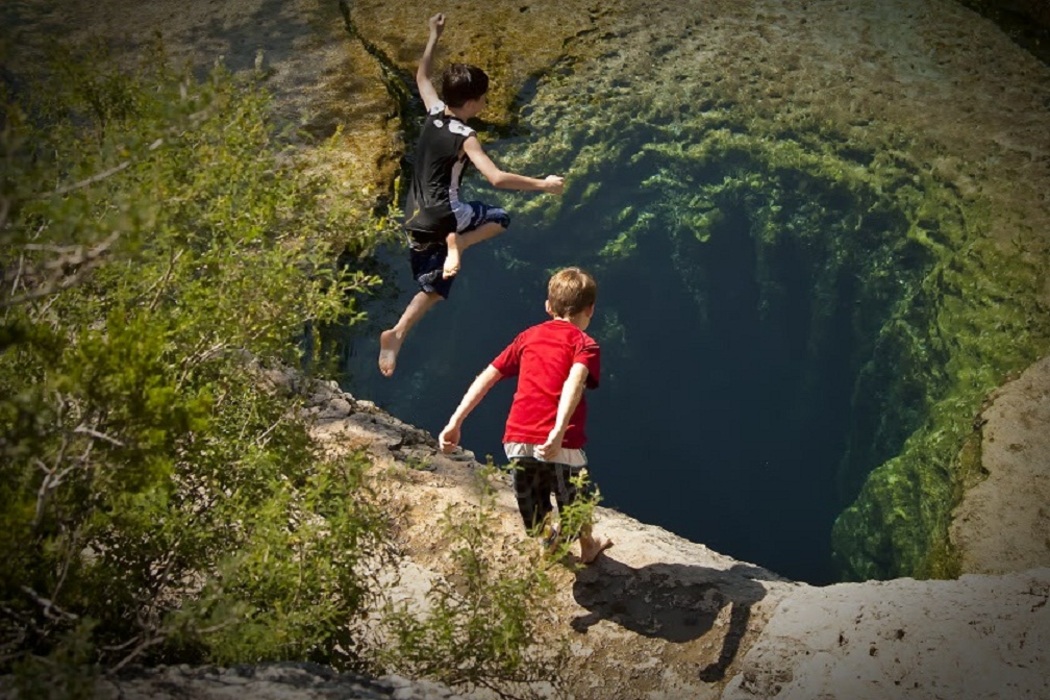 What makes the Texas Hill Country unique? In my mind, it comes down to one thing: groundwater. It is impossible to overstate the importance of groundwater to this precious region, because without it, the Hill Country would not be the region we know and love.

Although groundwater is invisible, concealed under layers of limestone beneath the land within aquifers, it sustains the springs and rivers that shape and define the Hill Country—from imposing limestone bluffs carved over millennia by the Guadalupe, to ancient shadowy Cypress trees with roots extending like tentacles into the clear waters of the Frio, to the trickling fern-lined springs tucked along tributaries of the Blanco. It is the beauty and abundance of the Hill Country’s water resources that have attracted people here for thousands of years.

As the recently published State of the Hill Country Report reveals, the region is on the verge of becoming a victim of its own success. The report introduces eight key metrics to help track the region’s health and guide decisions that will determine whether the region will continue to thrive or live beyond its means.

Unfortunately, current levels of groundwater pumping threaten to dry up rivers and springs as the Hill Country heads down the second path of living beyond its means.

Indigenous communities were the first peoples to settle near springs (Barton, San Marcos, Comal, San Antonio) that cradle the eastern edge of the Hill Country, traversing the outcrop of the Edwards Aquifer from which they are sourced. Many indigenous groups, such as the Coahuiltecan people, believe these springs to be sacred and part of their creation story. 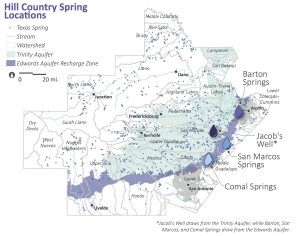 Today, unfortunately, groundwater is more of a commodity than a revered resource. The Hill Country is one of the fastest growing regions in the country, with its population increasing nearly 50% in the last 20 years. Much of this growth is occurring along the I-35 corridor between Austin and San Antonio, and groundwater is increasingly being used as a source of water for new sprawling suburban developments and growing towns.

Landowners recognize that groundwater is a critical water supply in rural areas, indeed often the sole source of water. But many people, particularly from urban areas, do not always appreciate the connection between groundwater in the Hill Country and the cool, clear swimming holes they escape to on a scorching summer afternoon. Even our legal and regulatory framework ignores the connection between groundwater and surface water, providing no clear pathway to holistically manage these two interconnected resources.

Yet the connection is profound. Five of the top 10 largest springs in Texas come from groundwater in the Edwards Aquifer, as the State of the Hill Country Report notes. And smaller swimming holes, like Blue Hole in Wimberley, Hamilton Pool, or the Blanco River, are sustained by groundwater from the Trinity Aquifer.

These springs and rivers are in danger of drying up.

Increases in groundwater pumping lowers aquifer levels, which can ultimately break the connection between groundwater and surface water. For example, drought conditions coupled with increased groundwater use have caused Jacob’s Well to stop flowing several times within the last decade, even though it flowed continuously through the drought of record in the 1950s.

Although just a few feet of drawdown in the aquifer level will reduce spring flow from Jacob’s Well, groundwater conservation districts in the area have not adopted a long-term management goal (referred to as a desired future condition, or DFC) that will ensure Jacob’s Well continues to flow in the future. In fact, the current goal allows a 30-foot drawdown in the Trinity Aquifer across the region through 2060, which experts say should be decreased in order to sustain water supply and spring flows for Jacob’s Well.

How to reduce groundwater pumping and protect our beloved Hill Country water resources.

The Hill Country needs to grow smartly and sustainably, encouraging water reuse and rainwater collection through increased incentives to developers and landowners. Alternative water supplies must be developed, like aquifer storage and recovery where water can be stored in aquifers during wet years and pumped out when needed during dry years. Ecologically valuable land that acts as a sponge, soaking and funneling rain underground and recharging aquifers must be protected.

On the demand side, landowners should be compensated to conserve their groundwater and to steward their land for enhanced recharge. In some cases, certain restrictions against groundwater pumping should be implemented in critical areas that recharge springs and rivers. The Hays Trinity Groundwater Conservation District has been on the frontlines of this

Ultimately, the Hill Country needs more voices advocating for all of these policies to protect both our groundwater and iconic rivers and springs that depend on them. Rural landowners, farmers, wildlife, fishermen, hunters, ranchers, towns, breweries, swimmers all depend on groundwater to give adequate flow to springs, creeks and rivers. It is up to all of us to conserve and protect these water resources that make our Hill Country thrive.

Vanessa Puig-Williams is an attorney and Director of the Texas Water Program at the Environmental Defense Fund. She also serves as board president of the Hill Country Alliance and board member of the Wimberley Valley Watershed Association.