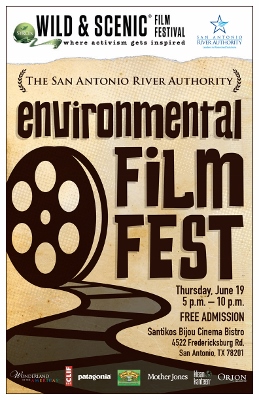 The festival will take place June 19 at Santikos Bijou Cinema Bistro at the Wonderland of the Americas Mall from 5:00 p.m. to 10:00 p.m. This is a free event; however, seating is limited to the first 200 attendees.

SARA is partnering with the South Yuba River Citizens League Annual Wild & Scenic® Film Festival to feature national and international short films about topics such as nature, adventure, wildlife, environmental justice, and conservation. The award-winning, full-length documentary produced by SARA about the San Antonio River will be the feature film of this year’s film festival. SARA intends to hold the Environmental Film Fest each June to celebrate National Rivers Month, and future festivals will showcase other local environmental films in the feature film time slot.

“National Rivers Month is a great opportunity to highlight the importance of maintaining the beauty and rich heritage of the San Antonio River while we learn about the issues facing other rivers from around the world,” said SARA’s General Manager Suzanne Scott. “We initiated this festival as a creative way to raise awareness of earth’s water resources and show how we all have a role in respecting and protecting them for the future.”

In addition to the film screenings, the public will get a chance to visit informational tables during the festival to learn about SARA and the Wild & Scenic® Film Festival sponsors as well as other local environmental groups including Alamo Area Master Naturalists, Alamo Group of the Sierra Club, Bat Conservation International, Edwards Aquifer, Greater Edwards Aquifer Alliance, Hill Country Alliance, and the San Antonio River Foundation.

SARA’s Environmental Film Fest is designed to be both entertaining and educational. It is hoped that those who attend the festival will leave informed about a variety of river-related issues, impassioned to help preserve and protect the San Antonio River Watershed, and inspired to go enjoy one of the many paddling trails or parks along the San Antonio River.

For more information about the festival and to view the full schedule of screenings, visit click here.

The San Antonio River Authority (SARA) was created by the 45th Texas Legislature on May 5, 1937 and reorganized in 1961 to plan, manage and implement water-related programs and projects within the San Antonio River Watershed. The State of Texas empowered SARA to preserve, protect and manage the resources and the ecology of the San Antonio River and its tributaries. To learn more about the SARA, visit our website at http://www.sara-tx.org

How much is the urban forest of Austin worth? More than you might think

As we do after every Texas Legislative Session, we’re here with a recap of the…