State climatologist: Dry conditions could worsen for much of Texas 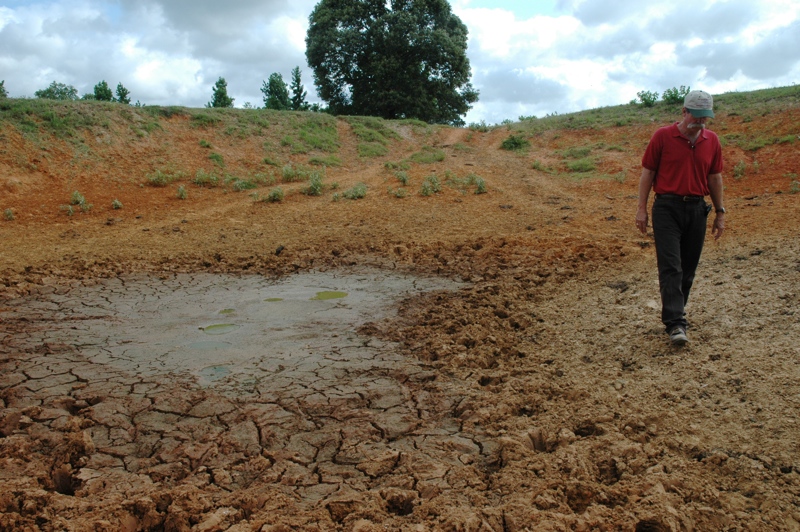 Drought conditions aren’t close to those experienced during the 2011 dry spell that gripped Texas for almost two years as seen in this photo of a livestock tank in East Texas. But soil moisture levels have been dropping, and La Nina conditions likely mean a warmer, drier winter. (Texas AgriLife Extension Service staff photo)

October and November were two of the driest Octobers and Novembers on record, and much of the state appears to be facing a continued dry spell through winter, according to the state climatologist.
Dr. John Nielsen-Gammon, College Station, said conditions were excessively dry throughout the typically wet fall months, and dry conditions are expected to continue through the next several weeks at least.

The lack of rain is causing concerns about fire danger, poorly developed winter pastures, including wheat, and dropping surface water levels for livestock, according to reports from Texas A&M AgriLife Extension Service agents in areas that have missed rain events.
“When you get a dry spell it takes a while for soils to dry out, but they do get there,” he said. “Take the areas affected by Hurricane Harvey, you saw extreme flooding in some areas and not much since then.”
Nielsen-Gammon said October-November 2017 was the 12th-driest since the state started keeping records in 1895. September and October are typically wetter months for Texas, he said, but rain hasn’t materialized.
No single county in Texas has received at least 4 inches of rain anywhere within its borders since the beginning of October, he said. Drier areas of the state, including North Central, West and South Texas, have received less than 2 inches over that period. Areas from the Winter Garden to Big Bend and from Lubbock to the Red River have received less than half an inch over those 60 days.
Warmer, sunny days, winds and lack of rain are drawing a growing portion of the state into drought conditions, he said. The drought monitor shows 35 percent of the state is in drought, up from just 2.5 percent a month ago, he said.
“October is usually one of the wettest months and oftentimes is extremely wet, but it’s been fairly dry and the forecast going forward into winter doesn’t look promising,” he said. “Overall for the next couple of weeks, it looks like most of the state will average less than half an inch of rainfall.”
The lack of intense or significant rain events that would produce runoff once it does rain could also be a concern for ranchers who rely on surface tanks for livestock water as winter progresses, he said. Runoff is contingent on soil moisture levels and rain intensity, but it typically takes 1-2 inches of rain to saturate the ground enough to create runoff or produce a flash amount that could replenish watering holes.
Nielsen-Gammon said it was too early to draw any comparisons to the state’s last significant dry spell when a dry fall and winter in 2010 stretched into spring and summer 2011. But La Niña conditions in the Pacific Ocean, which translates into warmer, drier air for much of the state, are expected through winter.
“Its effect will vary by region and local conditions when it comes to forage, crops and surface water, but it’s been hard so far, particularly on winter wheat in Northeast Texas because they are well below normal for rainfall,” he said. “Fields are having difficulty emerging and getting established.”