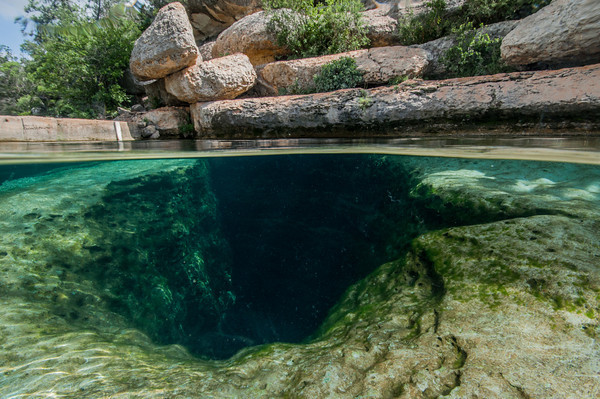 August 7, 2018 — Researchers from Southwest Research Institute (SwRI) and The University of Texas at San Antonio (UTSA) are using unique DNA-based tracers to characterize the recharge and flow patterns in the Edwards Aquifer. The work, led by Dr. Ronald Green of SwRI’s Space Science and Engineering Division and Dr. Vikram Kapoor of UTSA’s College of Engineering is supported by a $125,000 grant from the Connecting through Research Partnerships (Connect) Program.
The Edwards Aquifer is the primary source of drinking water for a vast number of people living in central and south Texas. As a naturally occurring water resource, it’s vulnerable to contamination from storm water runoff, leaking septic tanks and municipal waste. When a contamination occurs, it’s vital to detect the source quickly, which can be challenging.
“It’s very difficult to discern flow paths in the Edwards Aquifer,” Green said. “The bed of the waterway is made up of limestone, which has partially dissolved over time, creating a honeycomb structure that makes it impossible to visually identify the water’s path.”
To remedy this, the SwRI-UTSA team is using a new class of DNA-based tracers to map the flow path of the aquifer. The tracers will be capsules made of environmentally safe material to ensure protection from degradation in the environment while also permitting detection. The DNA material stored inside the capsule will be a synthetic double-stranded DNA that is unique to each tracer.

After the tracers are released at different points in the water source, samples from throughout the aquifer will be collected and examined. The team will note which tracer has appeared in each sample and how many are present, to determine their path through the aquifer. This new mapping method differs starkly from the traditional approach of using fluorescent dyes to visually trace flow paths.
“There’s a limited number of dyes,” said Green. “These DNA tracers allows us to map a larger number of unique flows paths all at the same time without fear of repetition. With this much more powerful tool,  we can identify where the recharge source areas are, how long water takes to travel and where it discharges.”
The method is expected to aid in the rapid detection of the source of contaminations by offering a clear, unique understanding of the complex flow paths of the aquifer. The team also plan to use the data results to create a robust database to calibrate surface water and ground water modeling, and support other hydrogeological studies.
The Connecting through Research Partnerships Program sponsored by the Office of the Vice President for Research, Economic Development, and Knowledge Enterprise at UTSA and the Executive Office at SwRI, is a grant opportunity offered to enhance greater scientific collaboration between the two institutions and to increase both UTSA’s and SwRI’s research-funding base with cross-campus collaborative programs.
For more information, visit Water Resources Services or contact Joanna Carver, (210) 522-2073, Communications Department, Southwest Research Institute, PO Drawer 28510, San Antonio, TX 78228-0510.