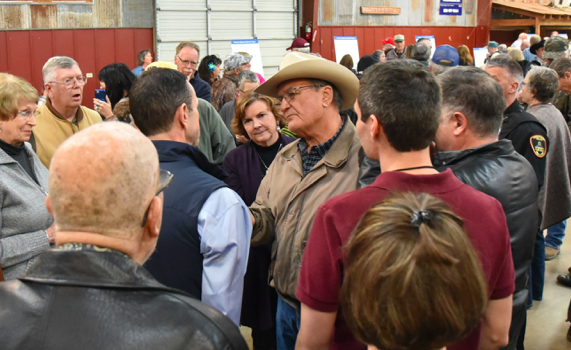 At two meetings last week about the proposed Kinder Morgan 42-inch natural gas pipeline project, landowners expressed displeasure with the routing of the giant project through land that, in some cases, stretches back generations.
A landowner meeting was held Tuesday, Feb. 19 at the Gillespie County Farm Bureau Events Hall. A company meeting, done at request of the city of Fredericksburg, was held Thursday at the Gillespie County Fair Grounds.
“My issue is that, one, unless you’re a steward of the land, you don’t understand how we’ve worked our butt off to make it better,” said Lloyd Wendel at Thursday’s meeting. Wendel is a 30-year U.S. Department of Agriculture employee whose land near Harper has been a part of his family legacy for nearly 100 years. He complained that the company did not address the crowd but “diluted” concerns of landowners by only setting up posters and slideshows.
“Secondly, he doesn’t drink water from a well like I do now. I depend on that aquifer for my existence and he doesn’t,” he said.
Read more from Ken Esten Cooke with The Fredericksburg Standard Radio Post here.