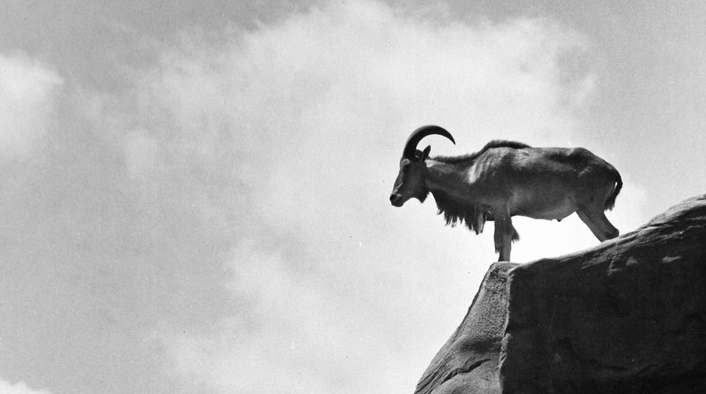 Allen Smith decided long ago what to do about the aoudads that wander onto his family’s land.
“The first four I saw, I shot,” he tells me.
From 5,000 feet up, in Smith’s Cessna Skymaster, the choices other Texans have made for their land roll out below—the network of oil and gas wells, the reflective surfaces of solar farms, the sleepaway camps, rodeo arenas, and dried-up, gutter-like creek beds. Smith’s family acreage, once dedicated to cattle, is now a refuge for native wildlife. From this perch in the sky, only movement would distinguish the tawny body of an aoudad from its desert habitat. Fringed in long hair from throat to chest, aoudads travel in a massive herd called an anger and scale steep cliffsides with surprising agility and speed. Their curved horns can easily exceed two feet in length.
Once, a different species—the native desert bighorn sheep—roamed the Southwest in abundance. But by the end of the 19th century, overhunting, habitat loss, and disease pared North American populations down to thousands of individuals. When the bighorns began disappearing from West Texas in the early 20th century, the North African aoudad took their place. Imported by zoos, and later set loose by private owners and public officials, aoudads flourished where bighorns had struggled to survive.
These two desert species have been subject to the same indignities of living alongside humans: They both have been hunted to the brink of extinction, and both have been transplanted to this part of West Texas, as aoudads, and later new populations of desert bighorns, were brought in to replace diminished bighorn herds. Many Texans, however, believe that only one, the desert bighorn, truly belongs here.
Unfortunately for them, bighorns are smaller and weaker than the sheeplike aoudads, which reproduce easily and require little water. A 2018 census found nearly 5,000 aoudads populating two mountain ranges in West Texas; decades of costly reintroduction efforts have nurtured a smaller population of desert bighorns, now tallying about 1,500 across 11 mountain ranges.
In December, Black Gap, a state-owned wildlife-management area, received a transplant of bighorns from nearby Elephant Mountain, which serves as the state’s well of bighorn brood stock. Since Smith’s property abuts Black Gap, the transplanted sheep will likely wander over. “The deal is, if you want the bighorn sheep—you have to protect them,” Smith says.
Hence Smith’s willingness to shoot any wayward aoudad he encounters on his land. “Unfortunately, they’re not supposed to be here,” says Froylan Hernandez, who leads desert bighorn programs for the Texas Parks and Wildlife Department. On state lands, or with a private landowner’s permission, he too will, at times, shoot aoudads on sight. “Our responsibility would be to exterminate them,” he says.
Read more from Marion Renault with The Atlantic here.