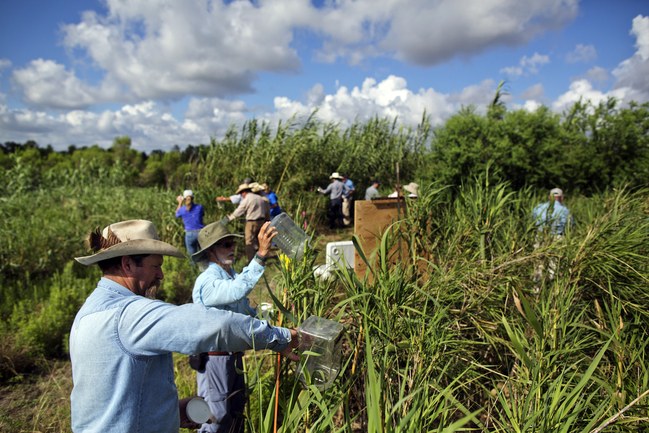 Someone wandering along the banks of the Rio Grande, on the American side, in the summer of 2009 might have been startled by a small cardboard box plummeting to the ground. Neatly sealed with blue packing tape, its paper wrapping crisp and clean, the box would have felt light, even empty. But then, on further inspection, an observer would have noticed the platoon of tiny black insects exiting a slit on one end. Slightly larger than a gnat, the insects would have buzzed off, one by one, into the South Texas heat.

The insects were wasps, which hours earlier had been taken from a refrigerator at the Moore Air Base, in Edinburg, Texas, where they’d been maintained in a soporific state, and placed, with utmost care, in the belly of a Cessna 206 by John Goolsby, an entomologist for the U.S.D.A. Agricultural Research Service. Between 2009 and 2012, 1.2 million wasps—at least a hundred per box—rained down along a five-hundred-and-eighty-eight-river-mile stretch of the border from Brownsville to Del Rio, as part of a joint program between the U.S.D.A. and Customs and Border Protection.

The wasps—which are not the stinging kind—are harmless to humans, but they do inflict damage on a very particular target: Arundo donax, an invasive grass that lines the banks of the Rio Grande in thickets, looking like a hybrid between a corn field and a bamboo forest. Brought to the New World as a building material, the grass has, over the last four hundred years, ruthlessly colonized the waterways of the southern U.S., driving out the native plants in its march to botanical dominance. It flourishes along the rivers of Texas and the Southwest like nowhere else; as much as a hundred thousand acres of the Rio Grande Basin are infested with it. Arundo wasps, which the U.S.D.A. imported from France and Spain, insert their ovipositors into the growing cane shoots to lay eggs, which soon hatch into hungry larvae that burrow through the vigorous plant, rendering it somewhat less savagely aggressive… Read more from the New Yorker