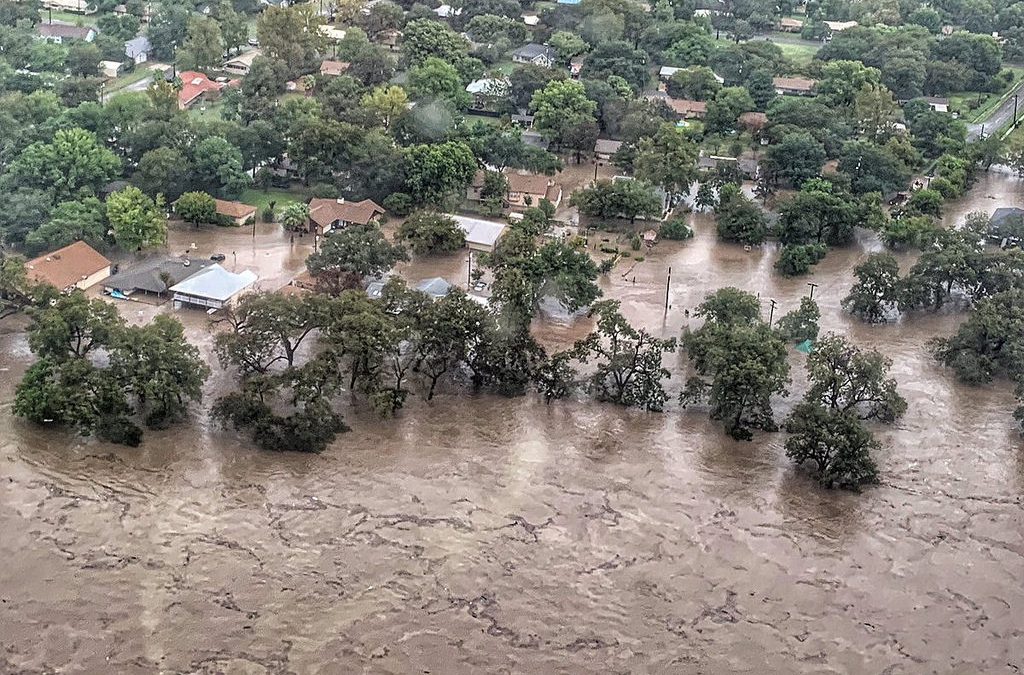 AUSTIN – As flood waters recede in the Llano, Colorado, Pedernales and other central Texas rivers, Texas Parks and Wildlife Department (TPWD) biologists are fielding questions from anglers and other members of the public concerning the impacts of flooding on fish populations. Although TPWD biologists do not expect to see a negative impact on fish populations in these rivers as a direct result of the flooding, the long-term outlook depends on how riverside landowners and communities respond to the aftermath of downed trees and other debris deposited in and along these rivers.
Central Texans are familiar with the slogan, ‘Turn Around, Don’t Drown,’ the public service warning that speaks to how quickly the region’s creeks and rivers can rise during heavy or sustained rainfall, especially in the Hill Country. When rain falls on the rocky landscape of the Hill Country, runoff from the land into creeks and rivers can lead to spikes or pulses in river flow, and even flooding. Land uses, vegetation, soils, slopes, and other watershed characteristics influence how much of the rainfall is captured by the land, infiltrating the ground and recharging aquifers and springs, as opposed to running off as sheet flow directly into creeks and rivers.
Hill Country rivers naturally experience periodic floods and droughts, and fish native to those systems are adapted to persist under those conditions. During floods, some fish will be displaced downstream while others avoid being swept away by hunkering down behind boulders, wood, or other structures in the river channel, which offer a refuge from high current velocities.
“Recent fish tracking studies conducted by TPWD and Texas Tech University on the Colorado and Trinity Rivers showed that some species of fish seek refuge in smaller, calmer tributary streams during floods, while others move into the slower moving waters on the floodplain,” said David Buckmeier, Director of the TPWD Heart of the Hills Fisheries Science Center. “Once the rivers settle back down, fish will often move back into the same reaches of river that they previously occupied.”
While receding flood water can leave some fish stranded on land, as was seen recently at Lake LBJ, fisheries biologists do not expect these localized fish kills to cause an overall decline in fish populations in rivers and reservoirs of the region. In fact, access to nutrient-rich floodplains during flooding can provide a boost to some fish species by increasing foraging opportunities and providing access to important spawning habitat.
While many anglers have expressed concern about the fate of Guadalupe bass, which largely resides in Hill Country rivers, biologists believe the floods will ultimately result in positive outcomes for the official state fish.
“Floods benefit Guadalupe bass habitats by clearing out excess sediment, rebuilding gravel bars and riffles, and adding boulders and woody debris to river channels, enhancing habitat quality for Guadalupe bass and other sport fishes,” said Tim Birdsong, Chief of Habitat Conservation for the TPWD Inland Fisheries Division.
Once the water recedes, riverside property owners may find erosion, uprooted trees, or brush, sediment or other material deposited along river banks. TPWD recommends a “less is more” strategy when working along the river corridor and to avoid any debris cleanup that utilizes heavy equipment, which could compact soils, damage stabilizing vegetation, and exacerbate erosion during future floods.
Riverside landowners are encouraged to plant native vegetation and to let trees and other woody debris remain in place on the land immediately adjacent to rivers, referred to as riparian areas. Fallen trees, woody debris such as branches and leaves, and a diversity of native plant life provides habitat for fish and wildlife and can help to stabilize banks and trap sediment.
“The benefits of healthy riparian areas cannot be overstated,” said Ryan McGillicuddy, TPWD Conservation Ecologist. “In addition to providing habitat for aquatic insects and native fish, healthy riparian areas can decrease erosion from flood waters, reduce sediment and pollutant accumulation downstream and store and slowly release water when it does flood.”
Since historic flooding on the Blanco River in 2015, TPWD has worked closely with flood-affected landowners and local conservation organizations to help manage and restore sensitive riparian areas.
A comprehensive overview of riparian restoration and design guidelines assembled for Blanco River landowners can be found on the TPWD website here.
“The concepts used in restoring Blanco River riparian areas are just as relevant for landowners and communities impacted by recent flooding on the Llano River,” McGillicuddy said.
Flood events can also make Hill Country rivers, streams and reservoirs vulnerable to aquatic invasive species like Arundo (giant cane) and elephant ear, which can establish dense stands rapidly and crowd out native plants and harm aquatic life. Landowners are encouraged to keep an eye out for these invasives and contact TPWD for assistance in treating them.
TPWD can also provide free technical assistance to Hill Country landowners interested in restoring their riparian areas. Contact Ryan McGillicuddy, TPWD Conservation Ecologist, at ryan.mcgilicuddy@tpwd.texas.gov or (512) 754-6844 for more information.
Photos of flooding on the Llano River, taken during and after, can be found on Flickr here: https://flic.kr/s/aHskKerdPC.