What’s in the way of this Texas pipeline? A cute songbird 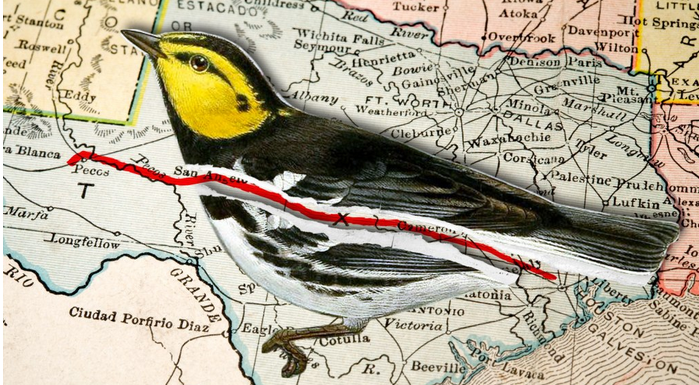 The golden-cheeked warbler, an endangered songbird native to Central Texas, always seems to be flitting around controversy. It proved to be a roadblock derailing the Texas Department of Transportation’s plans to build a toll road in 2016. Prominent politicians in Texas say protections for the bird infringe on property rights. And in the last few years, the diminutive bird has survived multiple attempts to remove it from the federal endangered species list.
Now the warbler is at the center of a fight between Kinder Morgan and landowners in the Hill Country who want to block the company’s proposed pipeline through the 25-county region. Last fall, Kinder Morgan unveiled plans to build the Permian Highway Pipeline, a 430-mile conduit capable of transporting 2.1 billion cubic feet of natural gas per day from the Permian Basin in West Texas to the Gulf Coast. The pipeline route would cut right through some of the most pristine parts of the state, including vast swaths of oak-juniper woodlands, the warbler’s preferred habitat. It would also run over the Edwards Aquifer, a source of drinking water for more than two million people in Texas.
A group of Hill Country landowners, the Travis Audubon Society, and Hays County, part of the Austin metro area, recently notified Kinder Morgan that it plans to sue the company if it applies for federal permits to build the pipeline without an adequate plan to protect the warbler and other endangered species in the area.
“They want to do the bare minimum, so long as it’s cheap and fast,” said David Smith, an attorney representing the group. “This is all about trying to get their project built faster than their competitors’ projects. But none of their competitors are insisting on going through a very environmentally sensitive part of the state.”
Read more from Naveena Sadasivam with Grist here.