Where light pollution is seeping into the rural night sky 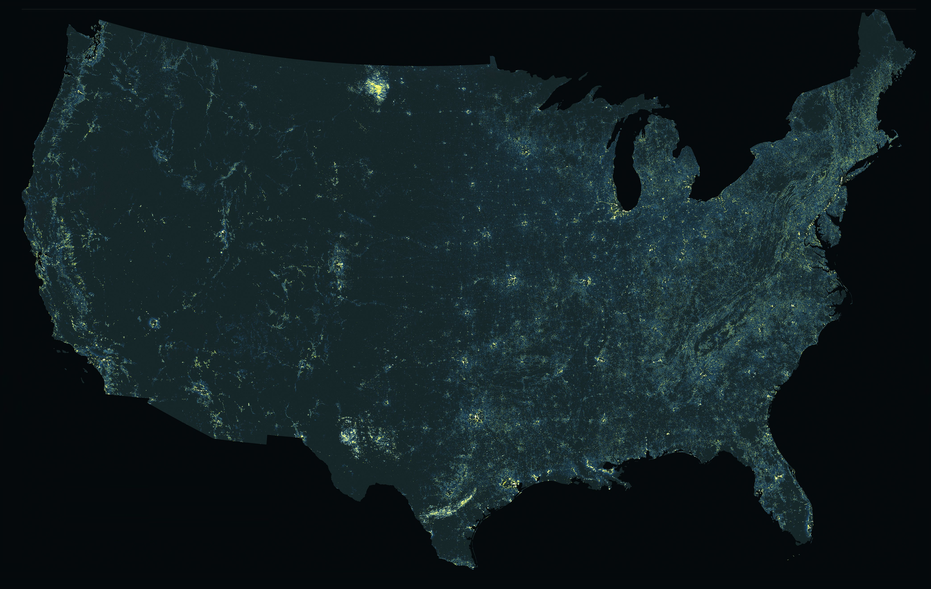 Artificial light that floods the night sky is thought to be only an urban phenomenon. But when you adjust for population, the picture is dramatically different.

The rule of thumb is that if you want to see the Milky Way, you have to venture out to the countryside. That’s where the illumination from streetlights and brightly lit offices that floods cities hasn’t obscured the night sky. But a recent map tracking the artificial lighting seen at night through satellite imagery paints a very different picture. In the map of the United States by Tim Wallace, a cartographer at Descartes Labs, metropolitan areas like New York City, Los Angeles, and Chicago are dark, while rural areas in the Dakotas and sparsely populated towns right outside major urban centers stand out as bright spots.
It’s not that cities have dramatically reduced light pollution (they haven’t). “Most of the light is coming from places where there are lots of people,” Wallace says of traditional nighttime maps, which look almost identical to population density maps. Instead, Wallace’s map is the result of taking 2015 nighttime data from the National Oceanic and Atmospheric Administration and (roughly) normalizing it for population so that it shows the amount of light emitted per person in an area.
What’s left is a cartographic look at a problem that’s often overshadowed: Light pollution is also a threat to rural areas, and it’s disrupting ecosystems that rely on natural darkness. Not only does rural lighting make star-gazing harder for enthusiasts and space researchers, it also seeps into nearby habitats, changing the resting and feeding behavior of wildlife. For nocturnal migratory birds, for example, these sources of illumination can be confusing, and even deadly. It’s a problem that the International Dark-Sky Association has been calling attention to.
Read more from Linda Poon with CityLab here.