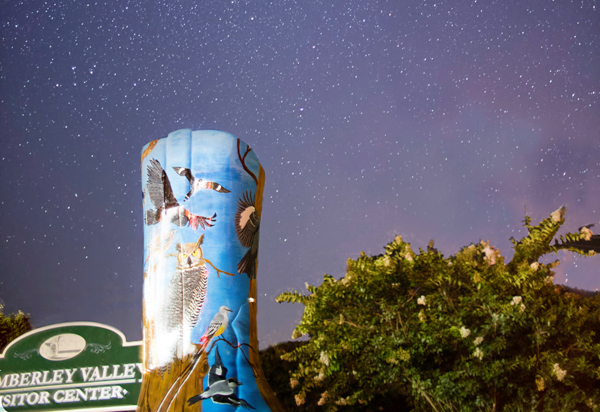 In recognition of noteworthy local efforts to reduce light pollution and promote the benefits of nighttime darkness, the International Dark-Sky Association (IDA) today designated the Wimberley Valley of Texas as an International Dark Sky Community.
It is only the third such designation to date in the Lone Star State.
The Wimberley Valley, situated in the Texas Hill Country between the Austin and San Antonio metropolitan areas, consists of the Cities of Wimberley and Woodcreek and neighboring unincorporated areas subject to limited municipal regulation. The Valley, home to some 14,000 people, has a strong tourism economy and hosts a thriving arts scene. To these characteristics, the community has added a proactive campaign to improve the quality of its outdoor lighting.
“The importance of the Wimberley Valley’s achievement cannot be understated,” said IDA Board of Directors President, and part-time Hill Country resident, Ken Kattner. “It’s a validation of our belief that dark skies are for everyone and that there are important gains to be made in Texas, even in the shadow of our biggest cities.”
Inspired by the success of the nearby City of Dripping Springs, which achieved International Dark Sky Community status in 2014, a group of volunteers formed the Wimberley Valley Dark Sky Committee (WVDSC) a year later and began working toward IDA accreditation. While lobbying for changes to existing outdoor lighting regulations in both Wimberley and Woodcreek, the Committee took on the task of raising the public profile of the area’s night skies and educating residents about the benefits of quality outdoor lighting.
“The Wimberley Valley Chamber of Commerce is grateful to the IDA for this important designation,” said the Chamber’s Executive Director, Cathy Moreman “As a dark-sky friendly community, Wimberley will now be recognized around the world as a place where our beautiful natural surroundings are protected and as a place where you can enjoy starry nights.”
The Dark Sky Committee recruited the participation of an array of partner organizations to help spread the word about the value of the community’s generally dark nighttime conditions and to actively solicit support for the nomination from a diversity of local stakeholders. By any standard, this strategy has been a success.
“I’m so proud of the hard work we’ve done over the last two years to obtain the designation,” said WVDSC Chair Shannon du Plessis. “It’s been such a joy to work with the people in our community, who thank us for our efforts when they see us around town.”
Now home to three International Dark Sky Parks and three International Dark Sky Communities, and additional designations expected in coming years, the Texas Hill Country is a remarkable emerging success story in the protection of dark night skies. Each new IDA designation deep in
the heart of Texas further affirms residents’ active support for keeping the stars at night big and bright.
The Wimberley Valley residents are excited to be a part of the IDA community. They look forward to their already popular community becoming known as a travel destination for folks who want to be able to see the Milky Way and the rest of the brilliant night sky.