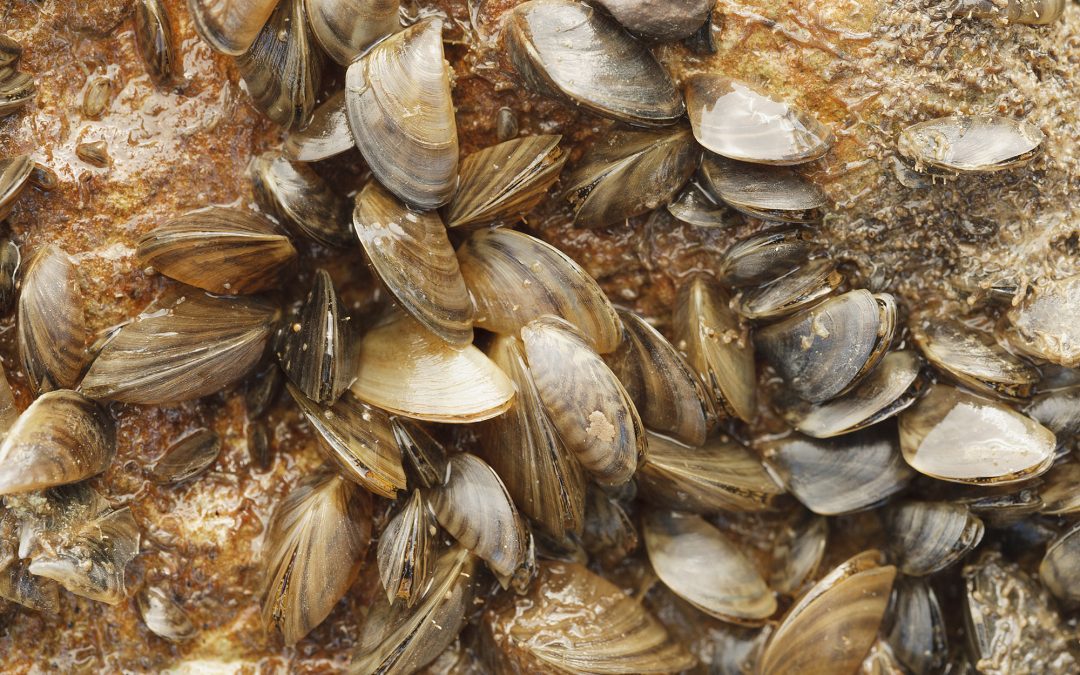 Invasive zebra mussels have now been positively identified in the Guadalupe River Basin in what is now the state’s southernmost affected lake.
Texas Parks and Wildlife Department (TPWD) fisheries biologists and game wardens confirmed the presence of zebra mussels at Canyon Lake June 8. Employees at Canyon Lake Marina noticed the zebra mussels while working on a boat that had been stored in a slip at Crane’s Mill Marina and contacted TPWD to report the discovery and to get verification.
“This is the first positive documentation of zebra mussels in Canyon Lake and in the Guadalupe River Basin,” said Brian Van Zee, Inland Fisheries regional director for TPWD. “Although marina staff have intercepted several incoming boats over the years that had invasive mussels attached, it is essential that boats stored on infested lakes be decontaminated before they’re moved as they are a key pathway for spreading this invasive species.”
The rapidly reproducing zebra mussels, originally from Eurasia, can have serious economic, environmental and recreational impacts on Texas reservoirs and rivers. Zebra mussels can cover shoreline rocks and litter beaches with treacherously sharp shells, clog public-water intakes, and damage boats and motors left in infested waters.
“It’s very unfortunate not only for the reservoir but also for downstream resources – including the Guadalupe River and the reservoirs downstream from Canyon Dam,” said Van Zee.
Canyon Lake is an 8,230-acre U.S. Army Corps of Engineers reservoir on the Guadalupe River, located 30 miles north of San Antonio and 40 miles southwest of Austin. The Guadalupe River and all of the reservoirs downstream of Canyon Lake are now at risk of invasion as zebra mussel larvae disperse downstream, including Lake Dunlap, Lake McQueeney, Lake Placid, Meadow Lake, Lake Gonzales (H-4), and Lake Wood (H-5).
Additionally, three state-listed threatened freshwater mussels found in the Guadalupe River basin could now be negatively impacted, including the Texas Pimpleback, the Golden Orb and the Texas Fatmucket.
“What’s been documented in other parts of the country is that zebra mussels can colonize on the shells of native mussels, and reach a density where they essentially smother and suffocate the native mussels,” Van Zee said.
Since zebra mussels were first found in Texas in 2009, 10 lakes in four river basins are now classified as infested, meaning they have an established, reproducing population – Belton, Bridgeport, Dean Gilbert (a 45-acre Community Fishing Lake in Sherman), Eagle Mountain, Lewisville, Randell, Ray Roberts, Stillhouse Hollow, Texoma and now Canyon.
Van Zee said that the lake’s popularity as a boating destination for Texans around the state combined with its deep water and suitable habitat made it vulnerable to the spread of zebra mussels.
“Unfortunately, I think this is a textbook scenario of a zebra mussel infestation that is the result of a contaminated boat being launched in the lake,” Van Zee said. “It really hits home how important it is for boaters to take ownership of the problem and to take the appropriate steps before moving a boat with zebra mussels attached as well as to clean, drain and dry their boats every time they leave a lake. We know that Texans love their lakes and rivers and by taking these three simple steps they do a lot of good toward helping prevent further spread of invasive species in our state.”
In Texas, it is unlawful to possess or transport zebra mussels, dead or alive. Boaters are required to drain all water from their boat and onboard receptacles before leaving or approaching a body of fresh water in order to prevent the transfer of zebra mussels that might be inside. Zebra mussel larvae are microscopic and both adults and larvae can survive for days in or on boats transported from a lake. The requirement to drain applies to all types and sizes of boats whether powered or not: personal watercraft, sailboats, kayaks/canoes or any other vessel used on public waters.
In addition to the adults and juveniles found in the lake, plankton samples collected from Canyon Lake also found zebra mussel larvae at multiple sites, meaning the lake has a fully established infestation. TPWD is working with the U.S. Army Corps of Engineers as well as the Guadalupe Blanco River Authority to continue to assess the extent of the infestation on Canyon Lake.
Boater awareness and education is very important when it comes to the issue of invasive species and TPWD will continue working with its partners across the state to spread the word to boaters.
More information about zebra mussels can be found online at tpwd.texas.gov/ZebraMussels.