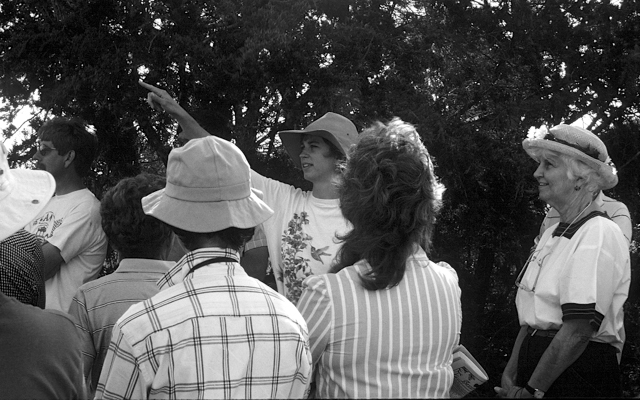 Boerne has successfully marketed itself as a beautiful place to visit or live. The Handbook of Texas describes the area: “Throughout its course, Cibolo Creek has been judged to be a ‘scenic’ and ‘picturesque’ stream.  This is particularly true as it passes through Kendall County where a steady flow serves as the basis for Cibolo Nature Center near Boerne. The stream has been dammed to create Boerne City Lake, which provides drinking water for the town’s residents. Further downstream, the creek contributes to the formation of Cascade Caverns”.

In 1990 Kendall County was declared a Critical Groundwater Area by the Texas Water Commission, noting that water availability and quality will be at risk within the next 50 years. The “Rule of Capture” was permitting unregulated groundwater pumping. In 2002 voters supported creation of the Cowcreek Underground Water Conservation District.

In 1992 the Cibolo Nature Center celebrated the Grand Opening of its new Headquarters, a recycled vintage 1898 building that was moved from Main Street. The Outdoor Classroom began and awards followed from the Texas Forest Service, the Boerne Chamber of Commerce, the Mind Science Foundation, the Governor’s Award for Environmental Excellence, the Texas Parks and Wildlife Department, Texas Association for Environmental Excellence, and many others.

(In the spirit of full disclosure, it should be noted that this reporter’s wife just happens to be the Executive Director of the CNC, Carolyn Chipman Evans, and he thinks she hung the moon.)

In 1993, the CNC worked with the City to create a hiking and biking trail along the railroad right of way, commonly referred to as Old Number Nine.

In 1996 the City of Boerne leased a portion of City Park to the Cibolo Nature Center, protecting the creekside, upland woods, marsh, and native prairie areas. Prairie restoration began with prescribed burns and mowing, which promotes the growth of native grasses.

In 1999 Art Wilson spearheaded the founding of the Cibolo Conservancy Land Trust, and was the first resident of Kendall County to place a family homestead, the Fabra Farm, in a conservation easement.

In 2000, the city acquired a grant from the Texas Parks and Wildlife Department’s Texas Recreational Trails Fund to construct trail-heads and trail amenities that provide for recreational, educational, and interpretive opportunities.

In 2003 the Hill Country Chapter of the Texas Master Naturalists began training volunteers.

The Lende Learning Center campus at the Cibolo Nature Center was completed in 2004 through donations of funds and sweat equity. The Center now provides nature-focused education, research, entertainment and outdoor activities for more than 100,000 visitors a year, while promoting sound stewardship of land, water and wildlife. A weathered, century-old building prominent on the Nature Center grounds serves as a visitor center, where kids and families are welcome to come inside to learn about nature through hands-on displays.

And in 2004, the Hill Country Alliance was formed. Concerned citizens began meeting  to share ideas about strengthening community activism and educating the public about water supply issues, scenic and night sky protection, land conservation and a more responsible approach growth in the Hill Country.

In 2004, The Nature Center Book was published, providing thousands of towns with the development blueprint created at the Cibolo Nature Center. The book has now been translated into Japanese and Chinese.

Interested in doing some of your conservation work on your private land? Thomas Hall, Estate Planning Attorney, will present the best practices in estate planning to legally protect and preserve the legacy of land at Boerne’s Cibolo Nature Center auditorium on August 26th at 6 pm. Members: $15; non-members: $20. Come discover how you can continue the tradition of conservation of our wonderful local natural resources. Call (210) 249-4616 for registration and details.

A Habitat Conservation Plan for the Southern Edwards Plateau: Opportunity or Liability

by Milan J. Michalec Bexar County and the City of San Antonio are working on…